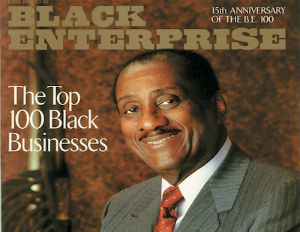 “Utterly determined,â€ are the first words that come to mind for Black Enterprise President and CEO, Earl “Butchâ€ Graves Jr. when describing the late black media pioneer John H. Johnson. “He was very dignified, sophisticated, and had the respect of black and white America. He was the godfather of African American media and gave rise to what you see today.â€

Featured on Black Enterprise’s June 1987 cover as BE’s first Entrepreneur of the Decade, Johnson was again honored at BE’s Entrepreneur’s Conference in 1997 as one of the “Marathon Menâ€ with a company listed on the BE 100s list for 25 years.Â In 2010, he was named #1 on Black Enterprise’s list of “40 Business Titans Who Shaped the World.â€ “I went in for the long haul with a determination,â€ he said of his rise, “nothing and nobody would get in my way.â€

The late and great John H. Johnson built a worldwide empire distributing name brands such as Ebony, Jet and Fashion Fair. Over 60 years, he touched and inspired African Americans, shattered barriers, fought and exposed injustice. Born as Johnny Johnson in 1918, Johnson’s love of publishing grew while attending classes at the University of Chicago. Working part time at Supreme Life Insurance Company, he saw a void in news for and about African Americans. Backed by faith and vision, he put together the Negro Digest. Using his mother’s furniture for collateral on a $500 loan, Johnson mailed his first issue. The rest is literally history. “It’s a fact. I’m tough, but I’m fair. You have to understand what tough means. Tough does not mean going around bullying people. Tough does not mean insulting people. Tough means that you hold people accountable,â€ he said, in his 1987 BE cover story. “I would much rather be known as tough and fair than to be thought of as soft.â€

Covering everything pertaining to the African American experience, events, individuals, history and particularly the civil rights movements, thanks to Johnson, black America had a resource to find factual updates and information on everything from King’s Montgomery Bus Boycott to the desegregation of American schools. As he expanded into fashion and cosmetics, his wife Eunice Rice Johnson directed and produced Ebony Fashion Fair shows raising millions for charity. “I am outraged as I visit communities around the nation and find that some of the largest sellers of barbecue are not black. Why don’t we own our own grocery stores? We eat fried chicken. Why can’t we own the restaurants? And you know that in many of the restaurants the cooks are black,â€ he said. “Now if we know how to cook the food, why can’t we sell the food? We have turned our backs on these so-called small businesses without realizing that these businesses can become large businesses.â€

The first African American to appear on Forbes’ list of America’s 400 richest, Johnson served on the board of directors of several Fortune 500 corporations, including Twentieth Century Fox Film, Zenith, Continental Bank, and Chrysler. Â “He was on the board of Chrysler and when he retired he called my father to replace him. They grew closer as time went on,â€ says Graves Jr. of Johnson and his father, Earl Graves, Chairman & Publisher of BE. “He was passionate on behalf of African Americans.â€

A major philanthropist known for donating to black-oriented causes and movements, he influenced politics serving as a special United States ambassador for Presidents John F. Kennedy, Lyndon B. Johnson. And even accompanying then Vice President Richard M. Nixon to Africa and Europe in 1957 and 1959. In 1996, Johnson received the Presidential Medal of Freedom from President Bill Clinton on the fiftieth anniversary of Ebony magazine. Handing down the family business torch by naming his daughter Linda Johnson Rice CEO of Johnson Publishing Company in 2002, John H. Johnson passed on August 8, 2005. Seven years later, in 2012, the U.S. Postal Service released a first-class stamp honoring his name and legacy as part of its black heritage series. “I always advise young people to dream small things, because small things can be achieved, and once you achieve a small dream and make a small success, it gives you the confidence to go on to the next step,â€ he said. “I think we as entrepreneurs have to start where we are, with what we already have.â€