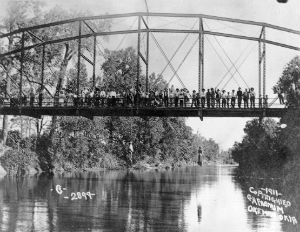 At around midnight on May 24, 1911, Laura Nelson and her son L.D. were kidnapped from their county jail cell in Okemah, Oklahoma. The two were jailed after L.D. shot an officer trying to apprehend them for the investigation of a cow theft.

By some accounts Laura was raped in those wee hours in the jail cell by about 40 men as she tried to protect L.D. from the mob of attackers. Reports also indicate that she had a baby with her as all of this occurred.

After the rape, Laura and L.D. were hanged from a bridge over the North Canadian River. Laura is one of the few documented lynchings of a woman. A spectacle of onlookers and picnickers came to watch the “event.” There are some reports that there were even postcards created and sold.

A study by the Equal Justice Initiative (EJI) documents the organization’s multiyear investigation into lynching in 12 Southern states during the period between Reconstruction and World War II.

Many analysts say modern-day society has not even scratched the surface when it comes to understanding the psychological and emotional impact this reign of terror had and is still having on black Americans.Â  What’s even less discussed is the disastrous and lasting economic effect.

Run for Your Life
Between 1910 and 1970, an estimated 6 million black people left the South in what’s called the Great Migration.Â  EJI researchers say fear of lynching played a much bigger role in the move North than history would like to acknowledge.Â  They say their research confirms that racial terror lynching was a tool used to enforce Jim Crow laws and racial segregation.Â  In addition, many of the victims of terror lynchings were murdered without being accused of any crime.Â  “Parents and spouses sent away loved ones who suddenly found themselves at risk of being lynched for social transgression,â€ the report states.

“It is imperative that we begin to talk about the Great Migration as a response to terror and trauma…not just the pursuit of economic opportunity,â€ says Bryan Stevenson, executive-director of the EJI and New York Times best-selling author.

“There’s no question that that kind of disruption–becoming a refugee and becoming an exile–takes away any accumulated wealth and stability.Â  Think of them as coming North as refugees burdened and stigmatized in ways that other immigrant communities were not,â€ Stevenson adds.

The Wealth We Left Behind
According to the Federation of Southern Cooperatives Land Assistance Fund, land ownership among blacks peaked at 15 million acres in 1910, of which 218,000 black farmers were full or part owners.Â  A steady decline of landownership begins after that.

It is widely accepted that one of the primary ways to pass on generational wealth is through real estate.Â  In fact, a study by Brandeis University finds that among households whose wealth grew over a period of time, the number of years owning a home accounted for nearly 30% of the difference in the relative growth of wealth between white and black families.