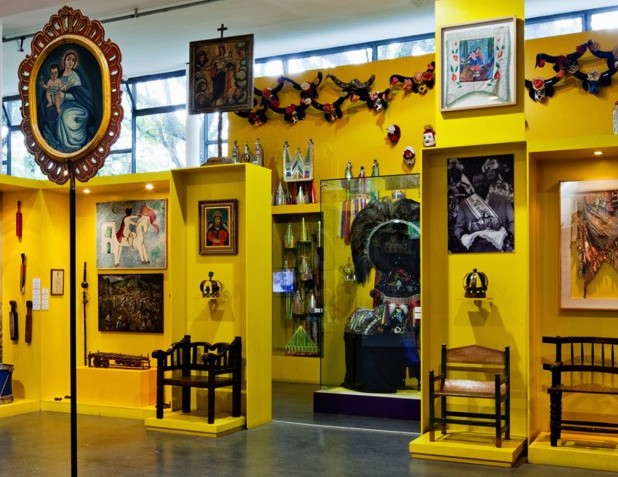 Part of an exhibit in Museu Afrobrasil

Roots tourism has gained traction among African American travelers looking to add a bit of education and reflection to vacations that would otherwise be filled with leisure and folly. From Africa to South America, landmarks commemorating key moments in black history are showcased, holding links to African Americans and Africans of the diaspora all over the world. Here are five landmark locales significant in black history to add to your next travel itinerary this year:

[RELATED: Voluntourism: Travel and Give Back with 6 Great Destinations]

GHANA: CAPE COAST CASTLE
On the Cape Coast, a beautiful seaside town that features serene beaches and pastel-colored fishing boats, there’s a place that holds a pivotal role in black history that’s not-so-beautiful but a consistent tourist stop for African Americans returning to the African country to trace their roots. It’s a fortress that served as slave dungeons, showcasing the harsh realities of the slave trade. Thousands have made a stop there while researching or on holiday, and Barack Obama famously visited the castle in 2009:

SENEGAL: ISLE DE GOREE
This African country also offers tourists lots of sun, comfy beach villas and vivid cultural fun, but it’s also home to the Isle de Goree, a UNESCO Historical Monument. It’s a tiny island that served as the embarkation point for slaves leaving the Senegambia destined for the plantations in the New World. Some former slave houses have been turned into historic sites, most famously “La Maison des Enclaves.” Tour guides are available to narrate the story of the location and the history of the slave trade there, or tourists can explore the buildings, community culture, and artwork on their own.

CANADA: AFRICVILLE
First settled in the 1860s, Africville was a thriving black Nova Scotian community that in 1960s was destroyed. Residents were displaced to free up land for Halifax’s industrial expansion, however, today it is an official national landmark. A museum has been created in the form of a replica of the church that was the heart of the community, featuring audio visual kiosks, pictures, descriptive panels, and artifacts that tell the story of the community and commemorates the injustice of the destruction.

UK:Â NATIONAL MUSEUMS LIVERPOOL
Located on the third floor of this global museum is the International Museum of Slavery, which includes interactive exhibits on life in West Africa before the slave trade, slavery and the Middle Passage as well as today’s issues with slavery around the world.

BRAZIL:MUSEU AFRO BRASIL
This institution capture what some say is a lost narrative of the history of African culture and it’s influence on Brazilian society. Located in Ibirapuera Park, a major urban park in SÃ£o Paulo, it holds about 6,000 items and pieces including paintings, sculptures, photos, documents and archives between the 15th century and the present day.