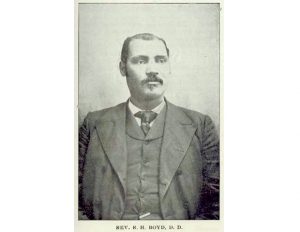 Shontavia Johnson, a lawyer and professor of Intellectual Property Law at Drake University, wrote an eye-opening piece on the history of African American slaves being denied (or having outright stolen), patents for their inventions.

Johnson writes, “One group of prolific innovators, however, has been largely ignored by history: black inventors born or forced into American slavery. Though U.S. patent law was created with color-blind language to foster innovation, the patent system consistently excluded these inventors from recognition.”

She explains that the patent system–which started officially in 1787–was not open to African Americans born into slavery as they weren’t considered citizens.

That barrier didn’t stop African Americans from inventing and their patents from being exploited. According to Johnson’s research, owners often took credit for slave inventions.

Here are a few examples of African American inventions during the time of slavery that Johnson cites:

Henry Boyd was born into slavery in Kentucky in 1802. After purchasing his freedom, he invented what came to be known as the “Boyd Bedstead,â€ a corded bed created with wooden rails connected to the headboard and footboard. His business grew successful and he employed 23 blacks and whites. He foresaw problems obtaining a patent so he partnered with a white craftsman and had his partner apply.

Benjamin Montgomery, born into slavery in 1819, invented a steamboat propeller designed for shallow waters. This was a valuable invention as it facilitated the delivery of food and critical items. As per Johnson, “Montgomery tried to apply for a patent. The application was rejected due to his status as a slave. Montgomery’s owners tried to take credit for the propeller invention and patent it themselves, but the patent office also rejected their application because they were not the true inventors.”

Johnson also has other examples of past and present black inventors. You can read her entire article here.