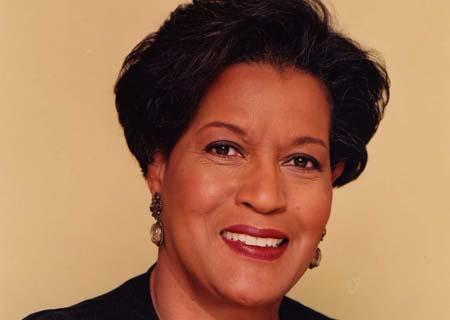 Dynamic. Powerful. Classy. These are just a few of the words used to describe 2014 Women of Power Legacy Recipient Myrlie Evers-Williams. Appearing at last year’s Women of Power Summit, her one-on-one interview with Sonia Alleyne was a vulnerable, candid reminder of the difficult path she walked to achieve an esteemed legacy. It’s one Evers-Williams adds to by pointing out that she is more than a civil rights icon. “I am known as ‘the widow of.’ There’s so much more to me than that,â€ she said in her interview. “First of all, I am a human being. There are strengths. There are weaknesses. And it is ok to say that.â€

Evers-Williams legacy is one of turmoil, struggle and rising from fire. Watching her husband Medgar Evers — field secretary for the NAACP -Â  die after being shot in his driveway by a sniper on June 12, 1963; she promised to never back down in seeking justice for his death. After witnessing two hung juries unable to convict the Ku Klux Klan leader accused of his murder, Myrlie turned her anger into a positive. She uprooted her family to California. Continuing activism work in a new state, Myrlie wrote a book about her life with Medgar, For Us, The Living. In 1970, she ran for Congress. Although unsuccessful, Ever-Williams made history as one of the first black women to make a bid for Congressional office in the Golden State. Later, she worked as an editor and columnist for Ladies Home Journal successfully pushing for the inclusion of more models of color within the periodical’s pages. Expanding her mission to corporate America influencing companies to focus on the progress of black women in the workforce. Always one to walk her own path, Myrlie remarried in 1976, a daring decision that other widows of Civil Rights leaders, like Coretta Scott King and Betty Shabazz, had not done.

With her new husband’s support, she ignored sexist attempts discouraging her to run for office as Chair of the NAACP. And in 1995, Evers-Williams won by a single vote that became the key factor in leading her to help revitalize the civil rights organization and return it from financial ruin. Once she achieved her goal in saving the NAACP, Evers-Williams stepped down to form the Medgar & Myrlie Evers Institute dedicated to the goal of preserving and advancing the legacy of Medgar Evers’ life’s work. In 1999, she released a second book Watch Me Fly: What I Learned on the Way to Becoming the Woman I Was Meant to Be, documenting her life’s work while inspiring women to live life. “Even today we become so focused on a mission that there are times we fail to give ourselves a chance to breath and to think and to be human and to cry and to scream,â€ she said at 2014’s Women of Power. “Life is for living each and every part of it.â€

Evers-Williams’ triumphant moment of justice came in 1994, when after her relentless investigative work she witnessed the overdue conviction of Byron De La Beckwith for the murder of Medgar Evers. Finally returning to Mississippi, she accepted a position as distinguished scholar in residence with her alma mater, Alcorn State University, the school where she and Medgar first met.

This past week, Evers-Williams resigned from her post at Alcorn to refocus on the Medgar & Myrlie Evers Institute. It’s a decision that echoes today’s revitalized life and refocused energy on the civil right movement, a journey that Evers-Williams continues to walk. “I’m still on that journey. I don’t think our journeys end.Â  My purpose for many years was to see that Medgar and his work was not pushed to the back pages,â€ said Evers-Williams, who made sure the country celebrated the 50th anniversary of her late husband’s life and work in 2013. “But this need to have him recognized nationally and internationally was accomplished at that point in time. It’s like breathing a sigh of relief. It’s finally done.â€