Black History Month: Then and Now in STEM 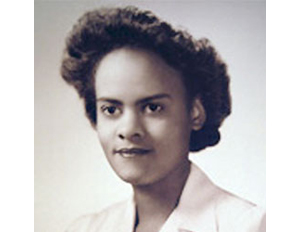 For Black History Month, we are honoring pioneers and their heir apparents. Here are two STEM pioneers: An African American woman who blazed a trail in the field of mathematics and her current-day counterpart.

Granville was one of the first African American women to earn her Ph.D. in mathematics at Yale University in 1949. She became one of the first black women computer programmers at IBM in 1956.

After graduation, Granville spent a year as a research assistant and part-time instructor at New York University Institute of Mathematics. Determining that she enjoyed teaching, she became an associate professor of mathematics at Fisk University in Nashville, Tennessee.

In 1952, Granville temporarily abandoned teaching to become a mathematician for the National Bureau of Standards in Washington, D.C., her work centering on the analyzation and application of mathematics toward the development of missile fuses.

In 1956, Granville took a job with the International Business Machines Corporation (IBM). When the National Aeronautics and Space Administration (NASA) contracted with IBM, she created computer software that analyzed satellite orbits for the Project Vanguard and Project Mercury space programs.

Her skills in high demand, Granville moved to Los Angeles in 1960 to perform research on computing orbits for the Computation and Data Reduction Center of Space Technology. In 1962, Granville accepted work on the Apollo Project at North American Aviation. She returned to IBM a year later, when the company offered her a senior mathematician position with its federal systems division.

From all accounts across the Internet, Granville appears to be alive and well at the age of 91. Her last employment was as a mathematics professor at the University of Texas at Tyler from 1990-1997, but she continued to promote the importance of mathematics in education.

Moore is a mathematician who earned her Ph.D. in biostatistics from UC Berkeley in 2002. She launched a first-of-its-kind math conference for minority women and girls, Infinite Possibilities.

Currently, Dr. Moore works for the City of Berkeley Public Health Department and is the lead of the Chronic Disease Prevention Program. Her efforts are focused primarily on reducing the rates of high-blood pressure, cardiovascular disease and diabetes in the African American community in South and West Berkeley.

Tanya Moore demonstrates that mathematicians can help divert social catastrophes. As the leader of the city-wide 2020 Vision Projects, launched in June 2010, Moore’s job is to help close the achievement gap between white, black, and Latino students in Berkeley, California, by 2020. She has a central role in designing the surveys, methodologies, and statistical indicators to be used for tracking student progress. After analyzing the data, she will help design and evaluate youth interventions and services across community agencies and city departments.

Moore’s concern with increasing educational achievement for minorities doesn’t end in Berkeley, where she received her Ph.D. in biostatistics. She also spearheads Infinite Possibilities, a national conference for women of color in all stages of mathematics–from high school students to post-docs and women in private industry. “I started it initially as a reunion because of the experiences I had at Spelman [College]. Now it has grown. It has created this wonderful community over the last few years.â€

Participants regularly write Moore about how Infinite Possibilities helped them feel less isolated in grad school. She understands their frustration firsthand. While working on a master’s degree at Johns Hopkins she received her share of intolerant comments. “People told me I would only pass qualifying exams because I was an African American woman and the school wanted to make their quota. I’d walk into a room and people would tell me I was in the wrong classroom. Sometimes a professor would say ‘Wow, you did better than we expected.’â€