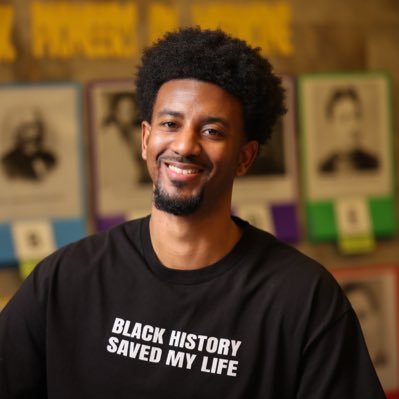 Ernest Crim III, an educator, speaker, and activist, and his wife were targeted in one of the most widely publicized hate crimes in the Trump era. Since then, he has spoken openly about how the incident led to his realization of how Black history saved his life.

These days, the high school teacher has become a TikTok educator to more than 250,000 followers. His Black history TikTok series has explored ties between Rosa Parks and Little Caesars, Denny’s and Jim Crow laws, and segregated cemeteries in Texas.

In the summer of 2016, Crim recorded a disturbing YouTube video called “Jessica Lynn Sanders Chicago Racist”, in which he and his wife, Cassie, were repeatedly called the N-word at the Chicago Margarita Festival.

Sanders, the woman caught on video, was found guilty of misdemeanor battery but acquitted of felony hate-crime counts and one count of aggravated battery, the Chicagoist reported. She was sentenced to 90 days in jail and one year of probation in 2017.

This incident for Crim, ignited a spark in him to leverage his battles with racism and served as a catalyst for his purpose behind teaching Black history. In his 2020 autobiography,  Black History Saved My Life: How My Viral Hate Crime Led to an Awakening, Crim chronicles his experiences throughout his childhood and adulthood in the 90s and 2000s, leading up to the 2016 incident. He also gives insight into how he managed to remain persistent in fighting for justice in the case against Sanders.

Crim, currently a social science teacher at Joliet Township High School, has taught for 12 years. He teaches U.S. History to 11th graders and an elective on African and Latin History.

Additionally, Crim holds a virtual Black History class for elementary school students. He told that TheGrio that his class has been intentionally split down the middle with half of the class made up of white students and the other Black.

Crim has noticed a lot of positive feedback from parents who prefer their children taking a class from a Black teacher.

“I think the summer of 2020 made a lot of people want to do better and be better,” Crim said.