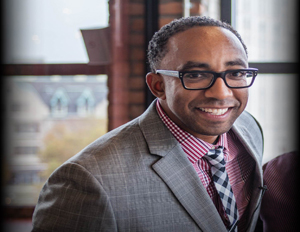 Hajj Flemings, founder of GoKit, is invested in developing the innovation economy in his hometown of Detroit (Image: Source)

When you think of tech Meccas in the states, one of two places likely comes to mind: Silicon Valley or New York’s Silicon Alley. However, in part due to the work of one savvy tech entrepreneur, techies may soon be adding Detroit, Michigan to that list.

Hajj Flemings, CEO and co-founder of digital storytelling platform GoKit, is highly invested in the former automotive center. The Detroit native is imparting his industry knowledge on to the next generation through Student Ventures, an initiative that exposes middle and high-school students to the world of entrepreneurship, mobile app development, digital technology and STEM education. The newly launched program helps address the technology gap that exists between mainstream America and underrepresented groups like blacks, Hispanics and females. Flemings partnered with Detroit Area Pre-College Engineering Program (DACPEP) on Student Ventures’ first event, held in October, and Dell sponsored the pitch competition, awarding the winner a Dell XPS12 ultrabook. “After being part of the CNN Black in America 4 documentary…there was a really large problem that I could help solve that really resonated with me,â€ he said.

Although the author and public speaker keeps busy with GoKit, which officially launched at SXSW 2012 and now has 5,000 subscribers, and Student Ventures, Flemings continues to hold his personal branding conference Brand Camp University, speak on panels and at events and serve as a go-to expert on all-things tech for media outlets such as NBC, Black Enterprise, and BusinessWeek.com. With the one year anniversary of the CNN special upon us, see what’s been keeping Flemings occupied and his thoughts on his NewMe and Black in America experiences.

After living in Silicon Valley…

I began to see the incredible opportunities that existed in Detroit.Â  The tech entrepreneurial density was increasing at an alarming rate but it was void of an inclusive presence that represented the demographic of the City of Detroit.Â  I am excited about helping to transform Detroit’s startup ecosystem.