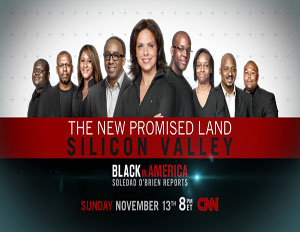 This Sunday, November 13, Soledad O’Brien hosts the fourth installment of Black in America: The New Promised Land – Silicon Valley (airing 8pm EST on CNN). With businesses by African-American entrepreneurs accounting for less than 1% of the new tech companies funded in Silicon Valley in 2010, O’Brien said it was imperative that this edition of the Black in America series look at blacks in technology—where they stand and how they’re advancing.

To do so, O’Brien and team documented the journey of eight technology entrepreneurs who were a part of this summer’s NewMe Accelerator program, the first minority led tech accelerator in Silicon Valley. Co-founded by Angela Benton—CEO of Black Web Media and BLACK ENTERPRISE August 2011 cover subject—and Wayne Sutton, blogger and social media expert, the accelerator put techies like BlackEnterprise.com Technology columnist Hajj Flemings in touch with business leaders from technology giants such as Facebook and Google, and gave them opportunity to pitch their business ideas to venture capitalists.

At a recent screening of Black in America in New York City, BlackEnterprise.com talked to O’Brien, Benton and guests like Michaela Angela Davis about the problems—and the promise—of blacks in technology.