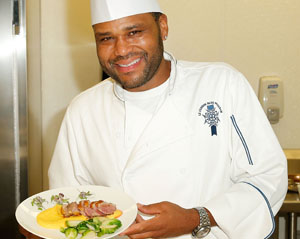 Anthony Anderson, Emmy-nominated actor, comedian, and star of ABC’s hit comedy series, Black-ish, recently stepped into the kitchen to try his hand at cooking. The star teamed up with renowned chef instructor Jeffrey Jimenez, of Le Cordon Bleu in Los Angeles, California, to mix and match flavors, recipes, and learn tips for creating his own culinary wonders with farmers market finds.

Dabbling in the world of cooking and ‘chef-hood’ is familiar territory for the entertainer. Anderson hosts the popular Food Network series, Eating America With Anthony Anderson, where he visits food festivals across the country to help master chefs cook up regional culinary delights. Past episodes documented trips to the Eight Flags Shrimp Festival inÂ Amelia Island, Florida, the Texas Crab Festival in Crystal Beach, and the New Orleans Wine and Food Experience in Louisiana, where he sampled dishes from more than 70 NOLA-loved restaurants before joining the competition for the coveted title: ‘King of Louisiana Seafood.’ Additionally, Anderson served as a judge and competitor on Iron Chef, and competed on the popular Chopped; alongside actressÂ Teri Hatcher,Â Antonio Sabato Jr., andÂ Dawn Wells, for itsÂ Celebrity Holiday Bash.

BlackEnterprise.com spoke with Anthony Anderson to discuss his passion for cooking and its ties to his family and loved ones.

BlackEnterprise.com: The art of cooking, particularly in African American culture, often has strong correlations with family, relationships, and tradition. Is this also true for you?

Anderson: I come from a medium-sized family–three brothers and sisters and a mother and a father. Cooking was our time to come together growing up; especially with me being involved with the High School of the Performing Arts, theater, other productions on the weekend and after hours, and my brothers playing sports. Dinner was the one time when we all would come together and catch up about what was going on at work with my father, at work with my mother, what play I was doing, or what audition I was having.

What sparked your interest in cooking?

I learned how to cook out of necessity. One day my mother decided she wasn’t going to cook anymore. She got addicted to a game called bingo; she still plays it 35 years later. But she just left one day and said, ‘I’m going to play Bingo. You’re gonna have to cook tonight. You’re daddy’s going to be hungry when he gets home from work so you’d better have something ready.’ And that was it.

Were there any chefs in particular who inspired you early on?

I grew up watching The Garvin Gourmet and Julia Child. So, that afternoon I watched Julia Child roast a chicken and I was like, ‘Alright. I guess that’s what I’m gonna do tonight.’ There’s was chicken in the refrigerator that was supposed to be cooked, my mother was gonna fry it–she didn’t– and it was a whole chicken. We had citrus trees in the backyard and a couple of avocado trees, so I went out and grabbed some lemons and some oranges. I remembered what Julia Child did. I put some butter between the skin and the meat. I put some onions, some fresh herbs with the lemon and the oranges, and made some boxed potatoes and canned corn. My father came home from work and said, ‘You’re mama put her ‘foot’ in this tonight.’ I was like, ‘actually I cooked that.’ He looked at me like, ‘You cooked this?’Â  I said ‘yea’ and he said, ‘Well, what we eating tomorrow?’ So that’s how it came full circle for me; that’s what cooking is about for me. My first real meal that I cooked was met with so much appreciation. I loved watching my father eat and enjoy it. I loved watching my brother and my sister–she was just a baby at the time–I loved just watching my brothers eat and enjoy it; that brought me joy. That’s why I love doing what I do in the kitchen now.