10 Tweets Commemorating The #MikeBrownMemorial That You Should See 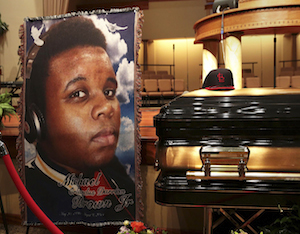 Early last week, protesters and global citizens keeping tabs on the Michael Brown case were alarmed when news broke that a memorial to the fallen 18-year-old was destroyed in a fire.

The St. Louis suburb was tense afterward, adding to the community angst after the unarmed black teen was shot and killed by police in August. Residents and protesters at the site of the memorial last Tuesday blamed police for its destruction. As Anthony Levine of Florissant, another St. Louis suburb, said, “It’s the same as if somebody came and desecrated a grave.”

With the charred memorial still emitting light smoke, local NBC station KSDK reported that a beauty salon on West Florissant Avenue, where earlier protests had been held, was broken into. According to Ferguson resident Meldon Moffitt, the blaze began around 6:30 a.m. on Canfield Drive, the street where Brown was fatally shot by Ferguson police officer Darren Wilson. Two dozen residents gathered at the site and Twitter was aghast at the possibility that the teen’s memorial had been desecrated.

“Not one candle can put all the stuff that was up there on fire,” one woman told CBS St. Louis. “Come on now. It’s too moist out here.” Protesters and residents claim that the police used accelerants to deliberately set the memorial on fire and watched it burn as a way to draw attention away from the grand jury proceedings’ scant progress. To ensure that the world would not miss this, Twitter used its social media strength to raise awareness about the #MikeBrownMemorial defilement.

As the community came back to enshrine Michael Brown’s legacy bigger and brighter than ever, we spotlight the 10 #MikeBrownMemorial tweets that you should see.