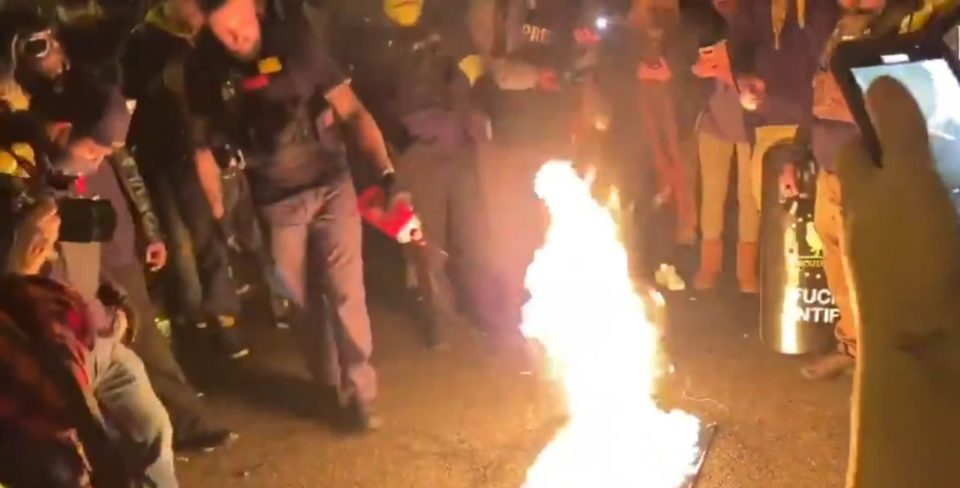 Pro-Trump demonstrators took to the streets of Washington D.C. on Dec. 13 and burnt down a Black Lives Matter banner from D.C.’s oldest Black church. However, Black Lives Matter activists are placing blame for the vandalism on the D.C. Mayor Muriel Bowser and the police department, according to WTOP News.

As President Donald Trump continues to make false claims of widespread election fraud to account for his Election Day loss, there have been numerous protests from his supporters. Kristen Clarke, president & executive director of Lawyers’ Committee for Civil Rights Under Law, posted a video of the Proud Boys and other white supremacists burning the banner.

Proud Boys and other white supremacists burn a Black Lives Matter sign from the Asbury United Methodist Church in D.C. while dousing it with lighter fluid to intensify the flames. This public act is intended to terrorize and send a message to Black people. pic.twitter.com/0YNsTDaVqF

Ne Ne Taylor, who is a co-organizer with Black Lives Matter told WTOP News, “I hold Mayor Bowser responsible for this.’

“If Black people and people of color was to act like this, they would have done what they’ve been doing since [the] George Floyd protests started. Tear gassing us, beating us, and arresting us. That happened to none of the Proud Boys. The police was around and they done nothing to the white supremacists.”

She feels that the intended actions of these racists groups will continue although President-elect Joe Biden takes over the role of president next month. The government needs to invest in several things in order to make things better for people.

“We have to invest into things that keep people safe: housing, health care, jobs, better schools, mental health. That’s where money needs to go, so we can build communities that can empower people and make a better world,” Taylor said. “If we all can eat and sleep and have jobs and health care, the world will be a better place.”