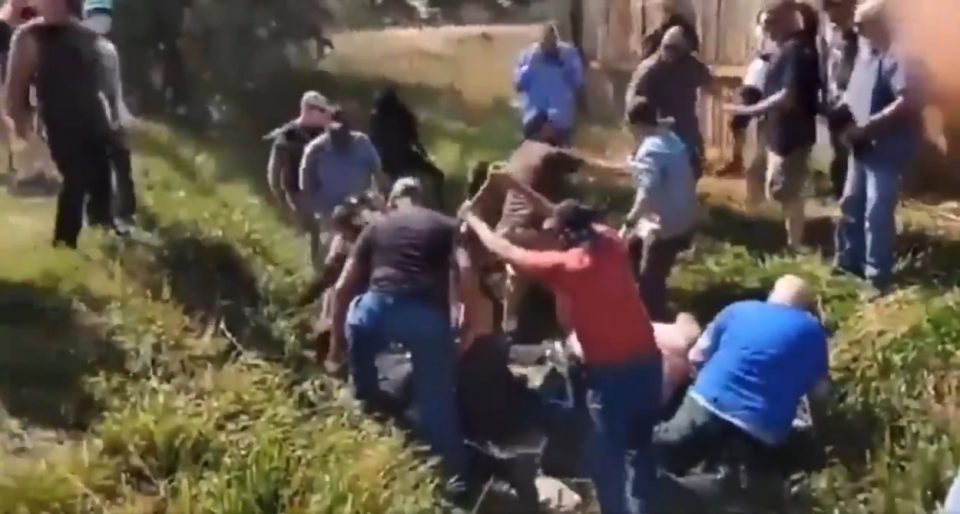 A pro-police “Back the Blue” rally turned violent over the weekend when attendees attacked some Black Lives Matter protesters in Colorado, according to The New York Daily News.

After a Black Lives Matter rally at Colorado State University on Saturday, protestors decided to head over to the “Back the Blue” rally over in Fort Collins. The rally, which was held outside of the Fort Collins police services station, featured attendees draped in American flags and some carrying Trump 2020 signs.

Here’s how The Daily News‘ David Matthews described the violence:

“In video of the incident, recorded on Saturday in Fort Collins, the protesters, who were vastly outnumbered by the pro-police group, are quickly surrounded and pushed toward an open, grassy area before they are attacked with punches and hit with various objects as the groups fall over each other on a ditch. At one point a man stabs at a man in all black with an American flag on a pole and another man strikes a man who is on the ground with what looks like a baton.”

Back the Blue rally goers push out BLM counter-protesters and then attacked them. Fort Collins, CO. pic.twitter.com/FbyWRpBUJ5

The city of Fort Collins released a statement on the activity from that day.

“We respect everyone’s right to peacefully assemble. Our officers have consistently supported these rights in recent months as people have gathered to make their voices heard. For the safety of our community, acts of violence and other unlawful behavior have not and will not be tolerated from anyone,” said FCPS Chief Jeff Swoboda. “Truly supporting a cause means representing its values. Committing crimes in our community is not a way to support police. We stand for safety, period. We want all of our community members to feel safe here in Fort Collins and we reject any form of hate.”

“Truly supporting a cause means representing its values. Committing crimes is not a way to support police. We stand for safety, period. We want all of our community members to feel safe here in Fort Collins.” Info about yesterday’s protest: https://t.co/95J6ogxhzP pic.twitter.com/WVfRxKsJbD

The police chief released another video yesterday thanking those who submitted names, videos, and more information on the incident from over the weekend. He said more arrests are imminent.