Black Lives Matter Releases A Statement on Murder of Police 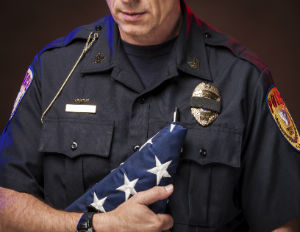 Millions of people have found purpose, community and even victories through the Movement for Black Lives. At a time when politicians don’t fight for us, laws don’t protect us and many in the media continue to malign us, our movement is our collective love letter to each other.

This movement has never called for the execution of law enforcement officers. Never. Still, many want to place the blame at our feet. As those who stand with, or are ourselves, the victims of police violence, we know all too well the deep sense of loss that a community feels when they lose a loved one.

And yet, we see great hypocrisy in the attempts to blame this movement for violence against the police. When police are killed, there is public and national mourning, attempts to strengthen laws to ensure their lives. There are convictions of the people who caused their deaths.

The Movement for Black Lives statement is part of a larger manifesto on the movement, as protests across the country escalateÂ with occupations of police union offices. More than 200,000 Americans have taken the pledge to join the fight to end state sponsored violence against black people.

More on the Global Organization of Black Lives Matter

Black Lives Matter is a chapter-based global organization working for the validity of black life. According to organizers, they are working to (re)build the black liberation movement. But the events of the last few weeks have changed the conversation about this movement, and so they were called to respond.

This week, our movement hits the streets for #FreedomNow; two days of nationally coordinated actions calling for a divestment from the policing strategies that have failed us. Nearly 200,000 people have pledged to stand together in this fight. From the U.K. to South Africa, the push in demand of the human rights of black people has been inspired by the bravery and tenacity of our movement here in America.

MoveOn.org and ColorofChange.org have all mobilized members for the pledge, which can be seen here.