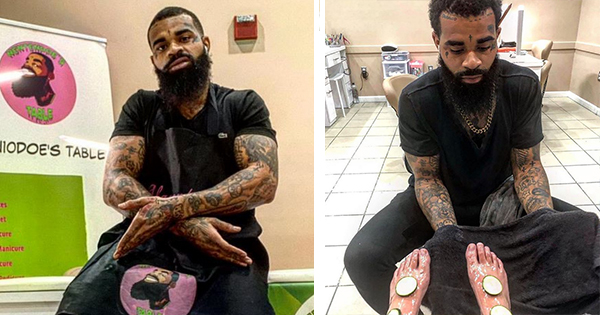 Only 2% of nail salon workers are Black and almost all of them are women, but 29-year old Darnell Atkins, a nail technician from the Washington, DC area wants to change that. Known as Nen10doe on social media, Darnell is defying gender norms to get his piece of the multi-billion dollar industry.

He says that he got his start after returning home from serving in the Navy and facing the difficulty of finding a job. “I resorted back to a couple of hustles,” Atkins told WUSA-9. “But in the midst of me resorting back, I always found myself in front of a Black-owned nail salon. All the hustlers would gravitate towards this area because that is where all the pretty girls were.”

When he learned how profitable manicures and pedicures could be (up to $70 per customer), he soon found himself in training. Before long, he had become a certified nail technician. According to his web site, he provides “a nail experience that promotes natural nail growth while bringing your creativity and personality to life.”

Because so many people have never heard of or seen an African American man working as a nail technician before, people are so impressed with Darnell and have been supporting his business. In fact, many women love the idea that he is defying gender norms. Some even say he’s the best nail technician they know of.

Meanwhile, Darnell is enjoying the newfound fame and says his goal is “to inspire other Black men to pursue things they are interested in without feeling ashamed.”

This article was written by BlackBusiness.com.