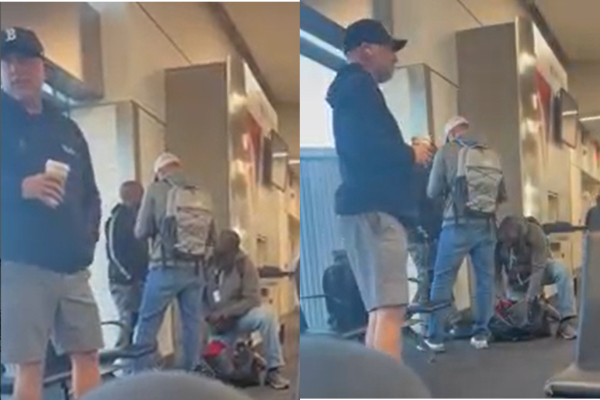 A Black man traveling to Los Angeles from Atlanta’s Hartsfield-Jackson airport had his bags completely searched by DEA agents, who provided no explanation why.

Award-winning veteran film director, Tabari Sturdivant, shared a short video clip along with a lengthy caption explaining what he experienced while at the Atlanta airport on Friday.

“Friday morning right as I was boarding a flight to LA, (2) DEA agents approached me,” Tabari explained.

“They asked for my ID, began to question me and proceeded to search me and my bags right in front of everyone.”

Sturdivant noted that he was “the only black person in the area,” and the only one the plainclothes officers decided to search.

“It was a humiliating experience,” he said. “People took their phones out and started filming.”

“They took everything out of my bag in front of everyone. No privacy. I was totally shocked and embarrassed.”

“After finding NO illegal contraband in my bag, they seemed disappointed and let me go,” he confirmed.

Sturdivant explained how once he got on the plane, passengers started questioning why he was searched. He said the questioning continued once he arrived in Los Angeles.

There was one passenger who admitted to filming the search and posting the video on social media. Following the encounter, Tabari is convinced that he was a victim of racial profiling.

“I was minding my business with a black hoodie and headphones on,” he explained. “I was standing in the middle of white 20 passengers and they singled me out and humiliated me.”

“I was definitely racially profiled.”

At the start of his caption, Tabari referenced comedian Eric André’s recent lawsuit filing after experiencing the same thing at the same airport.

Earlier this month, André and fellow comedian Clayton English filed a lawsuit with claims they were racially profiled by police at the Hartsfield-Jackson Atlanta International Airport on separate occasions in 2021 and 2020, NPR reported.

As BLACK ENTERPRISE previously reported, the two well-known comedians claimed they were illegally stopped by Clayton County officials at the Atlanta airport on separate occasions about six months apart. The lawsuit challenges the airport police program, saying officials are violating the constitutional rights of Black airline passengers, interrogating them, and taking them through coercive searches as they board their flights.

“They are neither; the CCPD jet bridge interdictions rely on coercion, and targets are selected disproportionately based on their race.”

Sturdivant is a well-respected filmmaker who was voted Georgia’s Best Independent Filmmaker of 2013 by the Georgia Entertainment Gala.