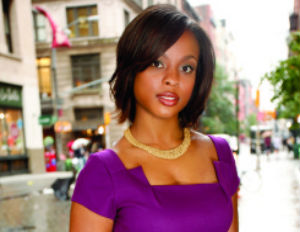 Picture this: A room full of educated black women with MBAs from top tier schools mingling, networking and making long lasting professional connections. That’s what Daria Burke envisioned and she quit her job to make Black MBA Women a reality.

“I felt compelled to create an organization that catered specifically to black women from top-tier business schools, and to put a spotlight on the incredible women who hold President and C-level positions who often go unrecognized,” said Burke. “For example, did you know that the CFO of Victoria’s Secret is a black woman?! And so are the CFO of Estee Lauder, the COO of Club Monaco and the CAO of Conde Nast…I could keep going!â€

The Detroit native bursts with enthusiasm about Black MBA Women, and with good reason. Since launching the organization just a few short months ago, membership has already swelled into the hundreds.

“I had a feeling I was on to something the second week after launching the beta site when I got emails from women thanking me for starting the organization and expressing their surprise that it didn’t already exist,” Burke says.

The path seems very clear now, but the New York University Stern School of Business graduate had to do some soul-searching (and account cushioning) to muster up the courage to leave her position as director of make up marketing for cosmetics giant EstÃ©e Lauder.

“Once I had the validation (rapid growth, interest and encouragement from potential corporate partners), it became a much easier decision. In general, I believe thinking too much can lead to analysis paralysis. At some point, you have to make the move,â€ Burke adds. “So I spent about four months building up to the decision, while positioning myself financially to have enough runway to take the leap, and I continued to remind myself that corporate America will always be there!â€

Burke is based in New York, but the organization has members from all over the country and has garnered the attention of big names in the corporate world. New York Life has joined Black MBA Women as a founding partner and the future holds more than just engaging networking sessions.

“In Spring 2013, I’m launching a web series called ‘Conversations in the C-Suite’ where I will interview President and C-level women about empowerment, leadership, leveraging being ‘different’ and in general, about their career journey. It is so important to tell the range of our stories, and for these amazing women— many of whom go unnoticed—to be recognized for their success and the barriers they continue to break for us to have a seat at the table,â€ Burke says.

In the more distant future, Burke plans to create a foundation called Girl CEO, an organization that she hopes will inspire and empower black girls everywhere by having them interact with powerful black women in a variety of careers.

For now, Black MBA Women is Burke’s focus though and she works diligently to create and maintain an exclusive membership. Black women who are currently enrolled in or have degrees from the top 25 MBA programs are welcome to join for $50 and $250 respectively.

For more information on Black MBA Women, check out to the official Website.