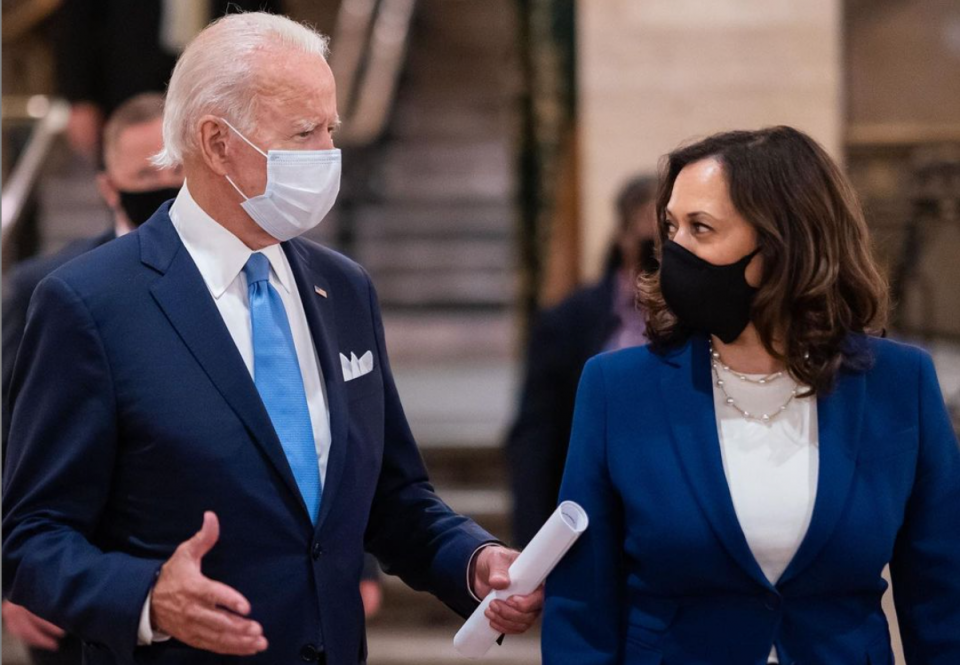 The Biden administration has “shut out” scores of Black-owned media firms from engaging in one of the nation’s biggest public health advertising campaigns: Encouraging Black Americans, the population hardest hit by COVID-19, to get vaccinated. As the pandemic has called attention to disparities in healthcare, a growing number of Black business owners say they have exposed inequities in such firms gaining access to federal advertising dollars for COVID-19 vaccination awareness efforts for Black communities.

Based on analysis BLACK ENTERPRISE conducted from data received from the Department of Health and Human Services (HHS), which has been charged with oversight of COVID-19 vaccine outreach efforts, Black-owned media firms have only received a fraction of the overall committed media spend of $212 million to date, and roughly a third of the of paid media dollars on advertising targeted at Black Americans. Also, none of the nation’s largest Black-owned advertising agencies has been contracted by HHS, or its agents, to participate in media outreach to a population that these agencies have the expertise of effectively developing products and public service messaging for more than four decades. (As of Aug. 2, less than half of Black people have received at least one COVID-19 vaccine dose in the vast majority of states reporting data, according to the Kaiser Family Foundation.)

These Black-owned media entities, including #RolandMartinUnfiltered, Allen Media Group, BLACK ENTERPRISE, and others, are now demanding equity in the distribution of advertising dollars from the Biden administration or they plan to take action, including calls for an investigation into a pattern of “systemic racism” in federal government advertising that dates back to the Clinton administration, which included in its Executive Order that all federal departments and agencies place advertising with Black-owned media outlets and these entities at “fair market rates.” In fact, several Black media owners have stressed that the Biden administration needs to be “held accountable in ensuring that their Black firms gain federal advertising commitments that match our influence and percentage of the population — some 13% — as well as the outsized role we played in getting Biden elected to the presidency in 2020.

Digital media and television journalist Roland Martin, who airs the daily podcast, “#RolandMartinUnfilitered,” maintains that Black-owned media companies have been “largely ignored” in their efforts to participate in such campaigns fully. In fact, he and other Black business leaders have spent months trying to gain answers from officials at HHS, the COVID-19 Task Force, and the White House, including Cedric Richmond, director of the White House Office of Public Engagement. Richmond, who told BE during its Health and Wellness Summit in March that the administration would include Black-owned businesses in every aspect of boosting COVID-19 information and vaccine confidence, has disregarded BE’s direct interview requests and those made to the White House’s Office of African American Media.

“The Biden administration has continued the practice of marginalizing Black-owned media by denying our firms access to advertising dollars to speak directly to our audience during the height of a public health crisis,” says BLACK ENTERPRISE President and CEO Earl “Butch” Graves, Jr. “Despite the administration’s declaration of embracing racial equity, it has engaged in business as usual by using the same advertising agencies that dismiss the value of Black media and refuse to do business with us. In this case, they are engaging in systemic discrimination in a process that involves taxpayers’ dollars.”

The federal government represents one of the nation’s largest advertisers.

Officials from HHS’ Office of the Assistant Secretary of Public Affairs, or ASPA, claim that it has been fully engaged in its media outreach to Black communities to boost vaccination rates. “As this pandemic continues to exasperate existing health disparities, it is imperative that we meet people where they are with consistent, science-based public health messaging. That includes both earned and paid media opportunities with the Black press,” says a department spokesperson. “For that reason, HHS’s contractor, the Fors Marsh Group, has hired CMR, a media agency that specializes in outreach to the Black community to guide creative development and media buying in the Black community. We continue to ensure that campaign dollars are directed to Black audiences, including buys on TV, radio, digital out of home (electronic billboards), print, and digital/social media. The campaign has spent approximately 20% of paid media dollars on advertising targeted at the Black community. Separately, HHS has also prioritized investing dollars in minority and independently owned and operated media outlets, and as of June 2021, approximately 19% of the paid media budget was invested accordingly.”

According to HHS representatives involved in the COVID-19 outreach campaign, the overall spend for COVID-19 vaccination awareness has been roughly $212 million to date. The estimated dollars targeted to reach Black Americans was about $35.616 million, or 16.8%. However, the amount spent specifically with Black-owned media — including any combination of newspapers, websites, radio stations, local out-of-home vendors, digital billboards, and the like, has been $11.9 million, or 5.6% of total spend to date. And with those dollars allocated to 100 such companies, the average spend comes to $119,000 per Black media outlet. According to a partial list of Black-owned media that received COVID-19 vaccine awareness advertising provided by HHS, the majority of funds were allocated to local Black-owned newspapers — the largest of which has a circulation hovering around 30,000, according to Pew Research.

Moreover, there is a big distinction between Black-targeted media and Black-owned media when it comes to allocating dollars. Cable television channel BET, for example, serves Black audiences, but it is owned by ViacomCBS.

So just how did HHS structure the allocation of such media dollars for this effort?

In September 2020, ASPA hired the Arlington, Virginia-based management consulting firm Fors Marsh, or FMG, as its prime contractor, which tapped the following agencies: VMLY&R for creative; iHeart, Wavemaker, Reingold for media; and CMR (Creative Marketing Resources) and Hispanic Communications Network for multicultural. There hasn’t been any engagement with the nation’s largest Black-owned agencies like Burrell Communications Group, which has managed multimillion-dollar corporate accounts for P&G, Toyota, and the leading disaster relief organization, American Red Cross; or Walton Isaacson, which counts Lexus and Amazon among its accounts.

By November 2020, FMG also hired Imani Greene, CEO of Black-owned marketing firm GreeneGroup, as an individual consultant to oversee all agencies’ activities with responsibilities for buying media for the total market, including African Americans and Native Americans, Asian Pacific Islanders, and Latinx audiences. FMG also tapped Milwaukee, Wisconsin-based CMR, a Black-owned agency, for its “subject matter expertise” on the Black community.” Sources said that CMG contributed to the ad buy for radio but that recommendations on digital were executed by Reingold, the general market firm charged with the placement of all of the campaign’s digital advertising.

The Push For Equity In Advertising

When Martin contacted Biden administration officials immediately after the inauguration, he discovered that HHS had awarded FMG the national COVID-19 vaccine awareness campaign under the Trump administration. Although the previous administration contracted FMG, Black media owners maintained that they believed the incoming Biden administration would provide the necessary oversight to ensure millions of paid media dollars equitably flowed to Black-owned firms — especially given its stated racial equity mandate.

In April, Martin reached out to Greene about gaining COVID-19 vaccine awareness advertising given his program’s reach among Black American viewers on YouTube, Instagram, and Twitter. “We submitted an extensive $10 million proposal, and then we heard nothing for a whole month. They were supposed to start a six-week initiative, beginning May 17, and nothing,” he says. “We called. We emailed, and we got nothing. So finally, a month later, we finally connect with her, and so she tells us, ‘Truth be told, most of the money has already been spent.’ And I’m like, ‘Why the hell did we waste our time submitting a damn proposal then?’

HHS maintains Martin and other entities “may not be on plan at the moment but still have an opportunity” with the increase in dollars to advance vaccination messaging, especially with the looming threat of the delta variant.

Many assert that the current scenario has been a repeat of the $500 million U.S. Census campaign in which Black-owned media had largely been denied advertising opportunities. That effort was also managed by FMG and its collection of advertising partners. Says Martin: “The only reason I got any census money is I publicly called out the ad agencies.”

Some Black media firms have urged the Congressional Black Caucus to investigate the lack of advertising spend from federal government agencies — a nagging problem during the Trump and Obama administrations. In fact, Congresswoman Eleanor Holmes Norton and other CBC members found in their commissioned 2018 Government Accountability Office report that during the five fiscal years from 2013 to 2017, federal government agencies spent approximately $5 billion in advertising, but only a sliver went to Black-owned firms — a minuscule $51 million or roughly $10 million a year over the five-year period covered in that report.

Black business leaders assert that the Biden administration should meet the same standard as then-President Bill Clinton when he issued Executive Order 13170: Increasing Opportunities and Access for Disadvantaged Businesses in October 2000. Clinton focused on federal advertising in Section 4, citing that, “Each department or agency that contracts with businesses to develop advertising for the department or agency or to broadcast Federal advertising shall take an aggressive role in ensuring substantial minority-owned entities’ participation, including 8(a), SDB [Small Disadvantaged Business], and MBE [Minority Business Enterprise], in Federal advertising-related procurements.”

Moreover, Black business leaders are calling for a full accounting of federal expenditures. Just as companies like Allen Media, BLACK ENTERPRISE, and others have exposed major corporations and agencies for ad-budget discrimination and demanded greater spending with Black-owned firms, they say the same emphasis must be placed on the federal government. “The problem that we’re dealing with is that these ad agencies in corporate America are the exact same ad agencies who are screwing us when it comes to the federal government.” asserts Martin. “These are taxpayer dollars. These are dollars that Black folk are contributing to. I have made it clear to the Biden administration [and] CBC members that we are dealing with the same largely white ad agencies that refuse to do business with Black-owned media.”