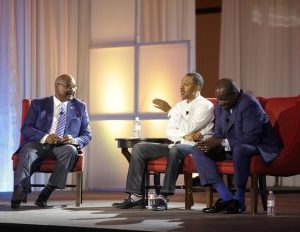 The landscape of corporate America may be difficult, but it’s not impossible for black men to navigate it successfully.

That was the message at the session “Leading and Succeeding in Corporate America,” sponsored by Georgia-Pacific at the first-ever Black Men XCEL Summit at the PGA National Resort & Spa in Palm Beach Gardens, Florida.

There is a lack of diversity at the top of many organizations. As moderator Ronald C. Parker, president and CEO of the Executive Leadership Council, noted, there are only two black male CEOs in the S&P 500, and only 5% of senior positions are held by black men.

“Still there’s quite a few employees of color, who when they look around their offices they only see people who look like them in cubicles, not in offices,” echoed Terrence Reed, vice president of talent selection at Georgia-Pacific.

“I have a lot of concerns when I think about the state of black men in corporate America. I don’t believe that black men are being prepared to be successful. We’re trying to skate to where the puck is now, so we’re falling behind,” said Corey Anthony, senior vice president of human resources and chief diversity officer of AT&T Services Inc.

Here are some of the strategies offered during the session for how black men can succeed in corporate America:

The future belongs to those who are competent in science, technology, engineering, and math. “You have to be heavily focused on where technology is taking us,” Anthony says. “It will democratize opportunities, not just across the country but around the world.”

“I lived in Istanbul for three years when I worked for Coca-Cola. I was able to get business done in the Middle East and Africa in a different way as an African American,” says Orlando Ashford, president of Holland America Line. “And I didn’t know that until I got there. There are places where we have an advantage over our white counterparts.”

“A lot of skill sets and a lot of things that helped you be successful up to the level of middle management may not help you going forward. You have to go back to school in whatever form that looks like,” says Anthony.

“In addition to re-skilling, there’s a different education around social connection, and it’s called nuance. As you start to progress into senior management, it really becomes about relationships, about perceptions,” says Ashford.

“A lot of us still suffer from that little voice in our head that asks do you really deserve to be here,” Anthony says. “It took a mentor to slap me around a bit. He told me, ‘If you’re in the role, you’re there because we believe you will be successful.'”

At the end of the day, it’s about demonstrating performance. “You have to be the best, and you have to be able to evidence that you’re the best. That’s what I tell my kids. And it’s true in the corporate space,” Anthony says.

Ashford agrees: “You have to be able to draw a really thick line between what you do and how it affects the business. It’s all about creating leverage.”

And those who already have a seat at the table have to do more to develop the pipeline. “We have to be louder,” says Anthony. “We have to be really good at identifying the talent and then you have to go to bat for them every single time. Every opportunity you get, you’re out there championing them. If I’m not doing that, shame on me.”