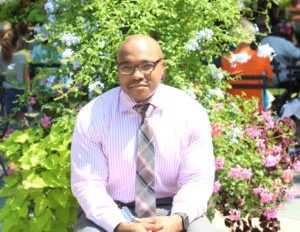 In recognition of our very first Black Men XCEL Summit, celebrating the best of black male achievement, the Black Enterprise staff is sharing their stories of the men who’ve had an extraordinary impact in their own lives…

Who is the man in your life who’s inspired you to excel?

How would you describe the impact he’s had on you?

It was an ironic impact. I never grew up with my dad in my life. For years I blamed him for all of the “wrongs” that happened or the things he never taught me—until I became an adult. I took an honest step back and looked at all of the amazing things he achieved as a professional and the sacrifices he made. He was the director of air traffic control for the entire airport, which took him away from the household and from being a dad a lot. But because of it, we had private schooling and access to things that most kids in Guyana didn’t. The impact of that shaped my path in life, it showed me what is really important in my life and what not to sacrifice in my life.

What’s your fondest memory of him?

The memory that sticks with me the most of my dad happened while we were on a bus. There was a gentleman sitting across from us who was smoking a cigarette. My dad politely asked him to put the cigarette out because there were kids on the bus, to which the individual responded no. At a mere 5′ 5″, but he seemed 6′ 5″ at the time, my dad slapped the cigarette out of his hand and told him in a few not-so-nice words where he could put the cigarette. At that moment my dad showed me a lesson he never had to explain to me: Never back down from the things you believe in despite any obstacles or challenges.

What’s the biggest lesson he taught you?

To never give up and never make excuses when things are not going right in your life. He taught me to stand up and face my challenges head-on. He didn’t start with much, but he was able to make a good life for himself. And he never allowed anyone to say they couldn’t do something, considering the battles he faced when he passed away from Parkinson’s, which was the one battle he couldn’t win.

What are you doing to make him proud?

Continuing his legacy—learning from his mistakes and creating another exciting chapter of our family tree.

Register now for the Black Men XCEL Summit and
join us for a celebration of black men!