Behind the Music: Save the Music Programs! 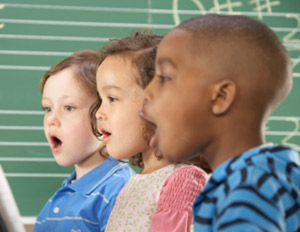 School districts across America are facing budget cuts in the current economic crises, and in many schools, music education is being cut as part of an effort to distribute dwindling resources. With music programs in jeopardy, an increased number of children will not have the opportunity to play the trumpet or sing second soprano in the school choir. The result is a generation that will miss out on the multiple benefits of not only studying but also learning music.

In this climate, the curriculum of The People’s Music School in Chicago is a beacon for free music education. Placement in the privately-funded school is in high demand. Families camp out for days at a time to vie for a spot for their children. The school is a rare haven for free education, but cannot replace the scope programs across the city of Chicago.

In our ongoing coverage of the music industry for Black Music Month, we spoke with several individuals personally invested in the issue, including Bob Fiedler who is Executive Director of the People’s Music School, where 300 students have a music intensive curriculum, rooted in theory and training. “In Chicago, there was a day when there was a thriving music education in the schools,â€ he says. “A very small percentage of the schools have music programs and band teachers.â€

Teachers from the school work with an additional 700 students in Chicago Public Schools. But, like many of the cities, thousands of Chicago children will not get exposed to music theory or learn to play an instrument. “The situation is not good in that just as budgets continue to become tighter and tighter, certain subjects that are deemed to be complimentary or extracurricular are things that get cut, especially because they are not on nationally standardized tests,â€ Fiedler explains. “There is no incentive for principals and schools to prioritize these things, because those subjects don’t affect standardized test results and school rankings.â€

But the academic, artistic and social benefits of music education are well documented. The study of music increases matriculation rates. Scott Robertson is Director of Marketing and Communication for National Association of Music Merchants (NAMM), an international organization of about 9,000 mom and pop music storeowners, with headquarters in California. “The access to education that includes music is a right stemming from decades of research that show that kids who study music do better in school and what they are going to pursue for the rest of their lives,â€ Robertson says.

Exactly how many programs have been cut is difficult to gauge without a conclusive survey, and the scope of existing programs vary across the states. “It’s hard to tell what’s happening across the country, it’s a district-by-district problem,â€ Robertson says. “We try to put information in the hands of local advocates, folks that school boards listen to.â€ NAMM set up a website, supportmusic.com, with a monthly conference call for nationwide discussions of challenges faced by school music programs.

While school districts struggle, local advocates have saved some music programs. Communities tend to support music programs. A Gallup poll conducted by NAMM indicates that more than 90 percent of Americans agree music is part of a well-rounded education. Several non-profit organizations are working to reverse the trend of cutting music education, including The Mr. Holland’s Opus Foundation and the VH1’s Save the Music Foundation.

Recording artist Tamia served as an ambassador for Save the Music in 2008. “Music programs in schools help young people learn the history and elements of music,â€ she says. “Can you imagine an amateur and/or a professional musician not learning the foundation of music principals at a young age? There is so much to learn from in a career in music. The best way to hone in on a musical gift early, is to be involved in a school music program.â€