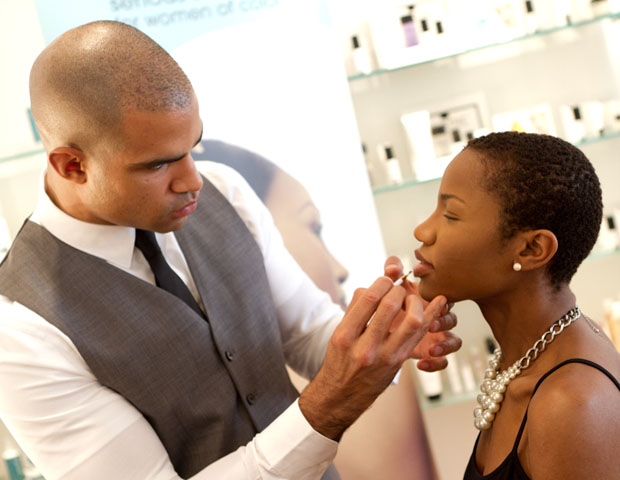 BEAUTY ESSENTIALS FOR THE CAREER WOMAN:

Statement lipstick or lip gloss: "The right color on the mouth can brighten, lift and complete the makeup look," Guyton says.

Guyton's Tip: Go for a moisturizing lip product that has the two-in-one convenience

Time has been flying, when it comes to Black Opal’s presence in the beauty game. According to the brand’s website, Black Opal has offered high-quality, high-performance beauty and skincare products for women of color—all under $20—for over 25 years. But new owners Desirée Rogers and Cheryl Mayberry McKissack have been rebooting the brand in 2021. Enhancing ways to connect with their customers and investing in new concepts seems to point in the direction they are headed. Fostering their goal of being a brand that women of color can count on, while keeping up with technology seems to have been a part of the recent journey.

“Terms of the deal were not disclosed, but WWD reported in 2019 that Black Opal was earning approximately $10 million in annual retail sales. It was already sold at CVS, Walmart, Rite Aid and through its DTC e-commerce site,” Glossy reported. “But in the first quarter of this year, Black Opal relaunched three skin-care products at the end of March; revamped product development in order to debut its first eyeshadow palettes, powders and lip and eye pencils; signed Ryan Destiny as a new brand ambassador; and increased its distribution footprint with the addition of Target.com and 100 Ulta stores and online. Even with the updates, all products remain under $20.

Rogers reportedly stated that the effort to take advantage of the early COVID-19 period entailed staying busy. Along with her partner, Rogers noted their ability to bring out our new products and continue the work as things were starting to get back to some type of new normal.

According to Glossy, the Black Opal DTC e-commerce site will feature shade matching, in addition to AR try-on using Perfect Corp. technology. This upgrade begins in June. Twenty-three models will reportedly represent foundation shades, as a part of the company’s virtual try-on feature.

She noted that few very large cosmetic companies are offering it for women of color, although it will enhance people’s knowledge, when they make purchases.

“We’re looking to expand that customer base through more product offerings in different areas,” McKissack told Glossy. “We have two sets of goals, on the product side and on the business side. We want to be known as a leader in the beauty industry for women of color because, unfortunately, there are not as many of us on the other side of the table, from a leadership standpoint.”

Glossy reported that Rogers and McKissack have increased Black Opal’s internal diversity representation, too. The businesswomen reportedly are pushing suppliers and third-party partners to follow their example.