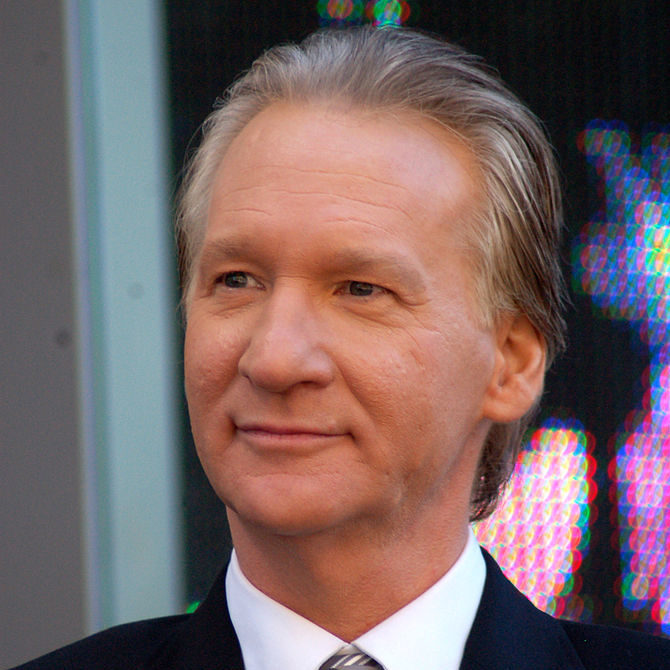 Bill Maher has built a successful career on a signature brand of comedy that is relentlessly provocative and politically incorrect. But because he’s a staunch critic of President Donald J. Trump and an advocate for equality, social justice, free speech, and the legalization of marijuana, he reigns as one of the leading voices on the left. He also uses his platform as a HBO television host to call out Republicans, but still, that does not dismiss the fact that his politics are still very problematic. For example, he’s expressed a deep-seeded disdain for Islam and has made a number of sexist and transphobic remarks throughout his career. Nevertheless, fans have turned a blind eye, mainly because like Joy Behar stated Monday on The View, “Bill Maher is one of the good guys in this fight against Trump.”

Others argue that as a comedian, Maher holds a creative license to use inflammatory language. But can that line ever be crossed?

For some (myself included), Maher finally crossed that line when he dropped the N-word Friday on his TV show Real Time With Bill Maher. In response, The Rev. Al Sharpton told TMZ that Maher’s use of the word was “outrageous,” while rapper Chance the Rapper and activist DeRay Mckesson went as far as to call for Maher to be fired from his TV hosting gig.

On the other hand, others have run to his defense, arguing that the joke he made using the racial slur falls in line with his style of comedy. Meanwhile, Whoopi Goldberg implied that Maher simply “made a mistake,” despite the causal nature and comfortability he showed when he used the word.

Should Bill Maher Be Fired? 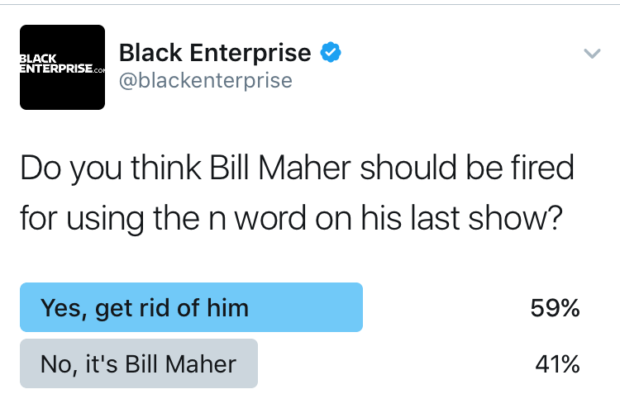 Black Enterprise decided to pose the question to our social media followers on Monday to get their take on the debate. The reaction we received has been mixed. Around 10:45 a.m. Tuesday morning, a 24-hour Twitter poll showed that 59% of respondents agreed he should be fired, while 41% said he should not.

The meme we created for Instagram, however, sparked a fiery ongoing debate. To my surprise, a number of black Instagram users have rushed to his defense, arguing that Maher, a 61-year-old white man, gets a hall pass for using the N-word. Some argue that because he’s been an ally in the #BlackLivesMatter movement, he has somehow earned the right to use the word. Others justify Maher’s comment by pointing out that he has a history of dating black women like video vixen Karrine “Superhead” Steffans. Some said that the context in which he used the N-word was excusable since he referred to himself as a “House N—er,” rather than directing the slur to describe a black person. 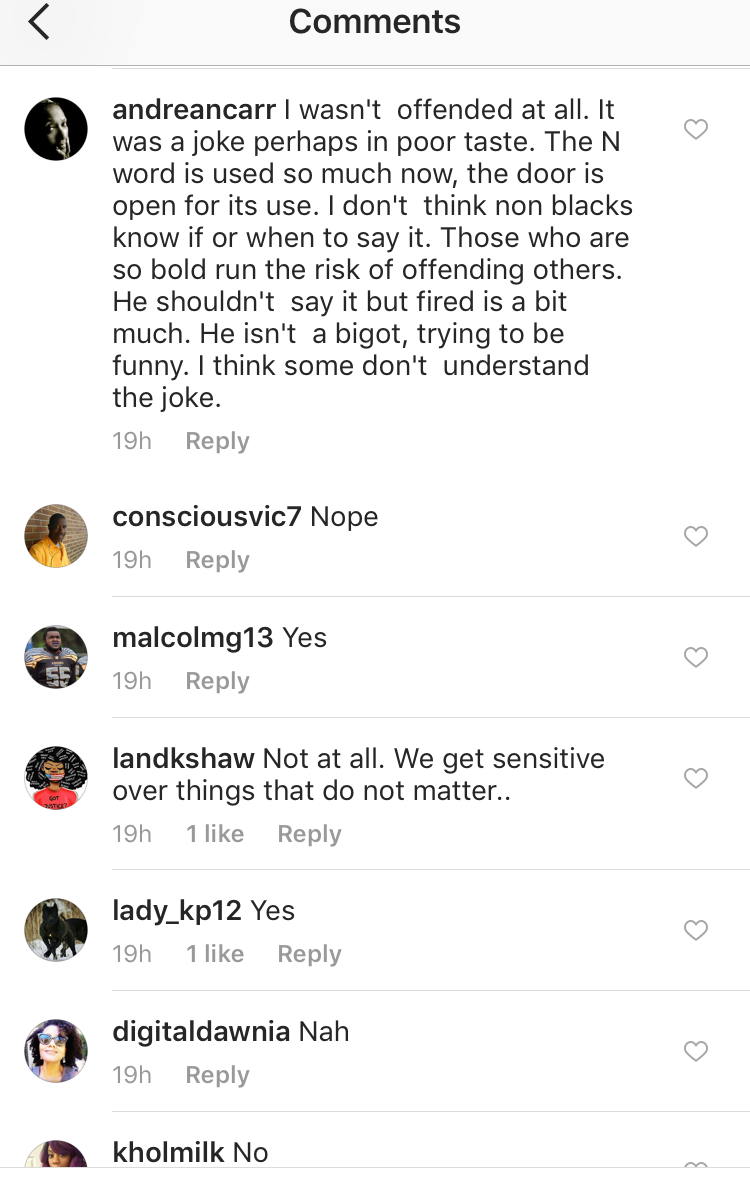 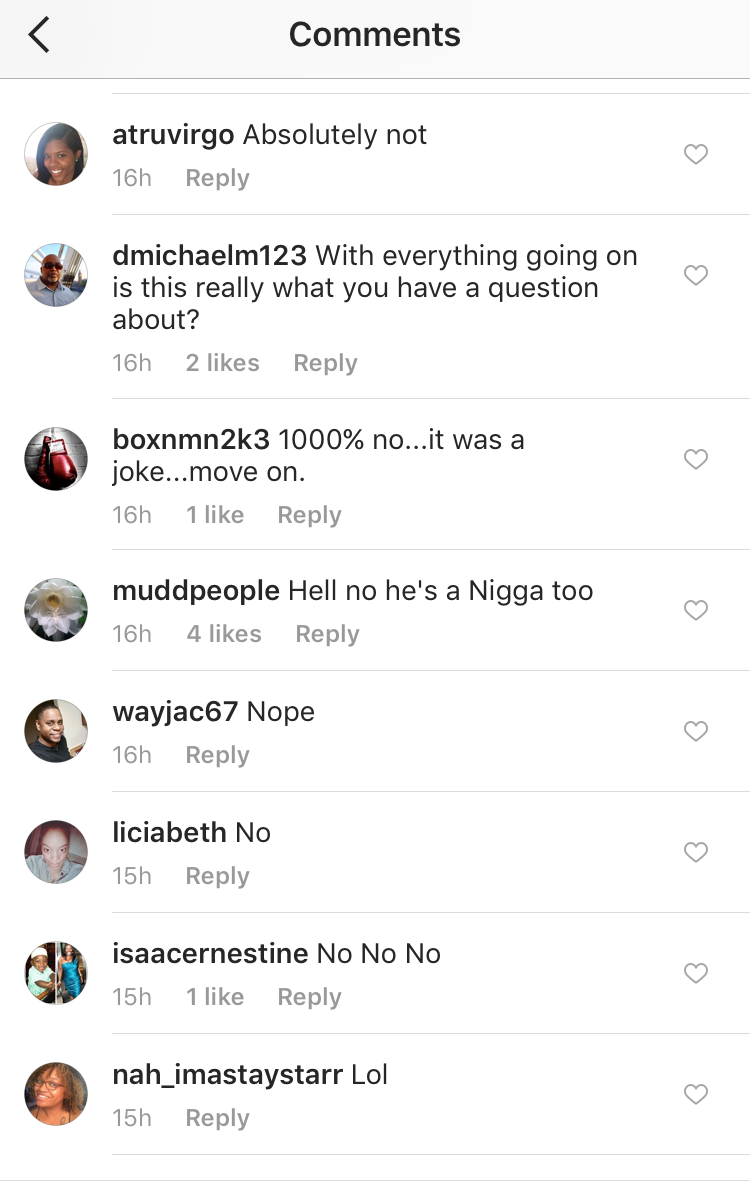 Although I am upset and outraged over Maher’s comment, I’m even more flabbergasted by the response we received on our IG post. In my opinion, white liberals don’t ever get a pass to say the N-word, no matter how “woke” they might be. The N-word conjures the pain of our past and a dark history when slaves and black people living in the Jim Crow south were raped, harassed, and murdered. The word, itself, is a representation of the ugliest part of America — a country that was built on the backs of a stolen people and continues to disproportionately hurt people of color. The word should not be used at all, and especially not by white folks who can’t feel our pain.

And so what that Maher likes black women? White slave masters fetishized over black women, too. Some even claimed to have fallen in love with slaves. But that didn’t dilute a relationship that was based on white supremacy and racism.

And, to black apologists who argue that it’s not offensive when Maher said the N-word because of the context that he used it in, I ask: Why does that matter? He made a disgusting jest about slavery. He’s not laughing with us, he’s laughing at us. Don’t let his progressive politics fool you.

Maher has been using his privilege as a famous comedian to say racist, Islamophobic, misogynistic things for years. Despite the apology he issued for using the N-word, he needs to be held accountable. If he doesn’t face real consequences, then this will open the door for other white folks to denigrate black people. It’s time for black people to call him out, not defend him. We know better.