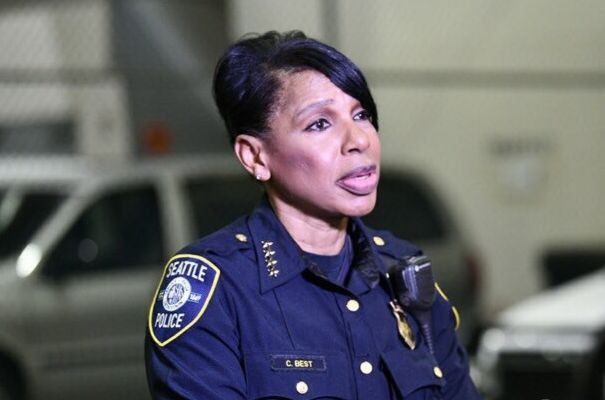 The ‘defund the police movement has been causing rifts around the country. Based on the decision of the Seattle City Council, the Seattle Chief of Police has resigned due to cuts in the police budget, according to CBS News.

Carmen Best, the city’s first Black police chief, has decided to walk away from the force after the Seattle City Council on Monday voted 7-1 to reduce the budget of the police department by $3.5 million, less than 1%, for the rest of the year. $17 million will be invested in community safety programs. The City Council has also approved reducing the department by as many as 100 officers through layoffs and attrition.

Best’s resignation takes effect on Sept. 2. Deputy Chief Adrian Diaz has been appointed by the mayor to become the interim chief.

“I am confident the department will make it through these difficult times,” Best said in her resignation letter. “You truly are the best police department in the country, and please trust me when I say, the vast majority of people in Seattle support you and appreciate you. … I look forward to seeing how this department moves forward through the process of re-envisioning public safety. I relish the work that will be done by all of you.”

Being the Seattle Police Chief was the dream of a lifetime and the men and women of the SPD will always have my love and respect. pic.twitter.com/N08d89gGkw

Mayor Jenny Durkan, who picked Best to lead the department in July 2018, said she accepted Best’s decision “with a very heavy heart.”

“I regret deeply that she concluded that the best way to serve the city and help the department was a change in leadership, in the hope that would change the dynamics to move forward with the City Council,” Durkan stated.

She also stated disappointment with the city council.

“It is unfortunate Council has refused to engage in a collaborative process to work with the mayor, Chief Best, and community members to develop a budget and policies that respond to community needs while accounting for — not just acknowledging — the significant labor and legal implications involved in transforming the Seattle Police Department,” Durkan said in a statement after the city council vote.