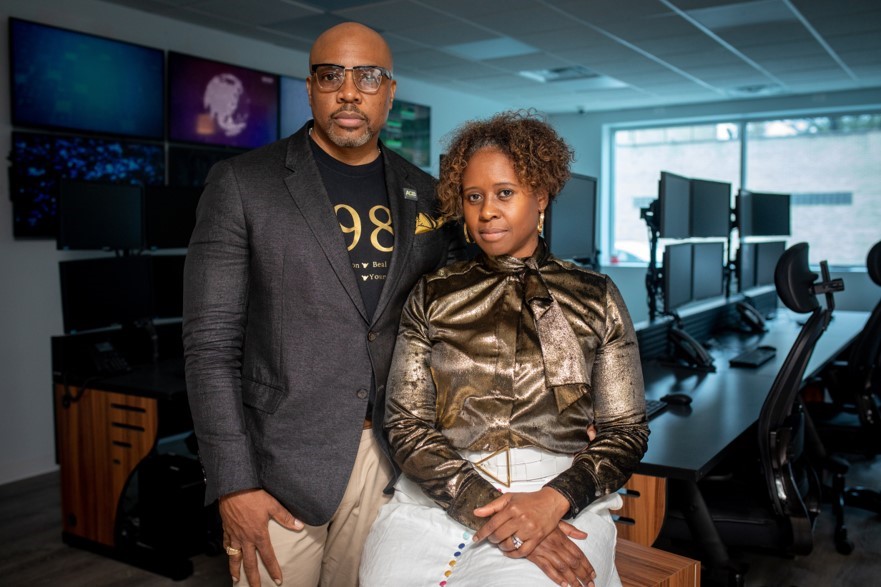 AGB
Growth in many U.S. industries has been greatly weakened by the COVID-19 pandemic. Yet cybersecurity is in a rare spot to flourish despite the drastic crisis.

That is among the reasons why John Griffin Jr. is expanding his security business in Chicago. In actuality, Griffin is moving ahead with vigorous strategic steps that include investing $500,000 to expand with a new cybersecurity operation, setting his company up for future revenue gains.

Fueled largely by increased demand for remote workers, growing concerns about cyberattacks, and other factors, the cybersecurity space is expected to surge.

The research firm Gartner projects global spending on information security and risk management services will rise to $150.4 billion this year, up 12.4% from last year.

The bullish prospects are big motivators for Griffin. He is the CEO of AGB Investigative Services. With over 1,500 employees, including 98% minorities, AGB calls itself the nation’s largest Black-owned security company. The firm uses technology, physical security, and training to address emerging threats in the public and private sectors. It serves over 15 states including Washington, D.C., targeting such sectors as retail, utilities, commercial real estate, residential, financial, education, and manufacturing. Griffin and his wife, Dr. Denitra Griffin, founded the company in 2001.

The firm just opened its Security Operations Center on Chicago’s South Side not far from its headquarters in the Marquette Park neighborhood, building on recent developments in the area, including the massive Obama Presidential Center.

Located in a renovated two-story building, the AGB cyber unit will include a team of certified cybersecurity experts from analysts to auditors who will now be able to proactively monitor threats around the clock. Other services will include IT security consulting, comprehensive risk assessments, social engineering, and a special focus on securing employees working from home.

Since employees are often the first line of cybersecurity defense, Griffin says his firm will provide clients organizational security awareness to ensure their employees are well-trained and do not fall prey to phishing, baiting, or physical breach attacks.

AGB declares that the services are needed as cyberattack attempts occur every 11 seconds, damages expected to cost $6 trillion globally in 2021. Further, cybersecurity is a growing concern for many types of businesses as cybercriminals are using more sophisticated tools to disrupt organizations. Griffin says the unit will target a broad mix of businesses, including ones offering financial, higher education, governmental, healthcare, and utility services because they often are among the sectors most vulnerable to cyberattacks.

He projects the expansion to create 20 high-paying technical jobs for those in underserved markets, with that number to rise as AGB grows. The opening of the cyber division is expected to generate $15 million in revenue over three years. Companywide, Griffin expects approximately 2021 revenue of $42 million, up from $31 million last year.

“For the past 20 years, physical security has been the backbone of AGB,” Griffin says. “Next year will be a game-changer with our pivot to cybersecurity. We anticipate half of all sales generated through our new cybersecurity offerings to Fortune 50 clients.”

The fresh operations center transformed the former Brothers Barbershop with the help of a $59,000 grant from the City of Chicago Neighborhood Opportunity Fund. Griffin says his vision was to find a way to give back to the community within Marquette Park that he got to know intimately during his twice-weekly haircuts at the Brothers Barbershop which he co-owned with his brother, Steve Griffin.

“In that location, the unemployment rate is one of the highest for Black and brown people,” he says. “My dream was to bring high-paying technical jobs to bridge the racial gap in the tech industry with career development and support. This not only helps the community but is in line with what AGB stands for— Always Giving Back.”

Along those lines, the charitable arm of AGB, the AGB Foundation, plans this year to offer five $2,000 college scholarships to cover post-secondary education costs for Chicago high school senior students. One of the scholarships will be specifically for a student with an interest in technology or engineering.

Denitra Griffin, the president of AGB and CEO of the firm’s foundation, stated, “The Jibrill Griffin Scholarship is one way we are investing in the future of our community and encouraging students to achieve their dreams and thrive within the technology industry.”