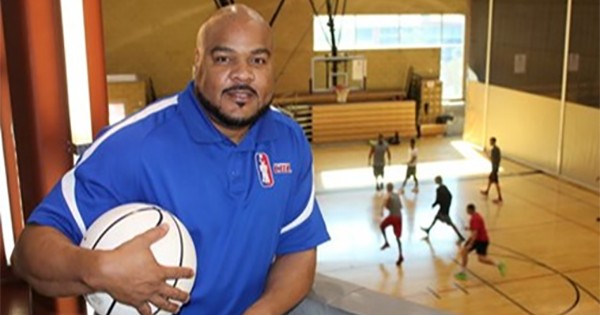 In communities across the country, recreational basketball is more than a way to pass the time while staying in shape; it’s a lifestyle filled with passion for the sport. Still, not everyone who loves basketball will make it to the professional level, whether it be the NBA or the WNBA. Some won’t even make it to the NCAA level and participate in March Madness despite possessing an incredible amount of natural athleticism and the grades to get into college.

So, what’s missing? Why do so many young men and women struggle to take their basketball skills to the next level? The answers aren’t easy to come by, especially when you consider socio-economic factors, and it only gets more complex when you add the coronavirus pandemic on top of it all.

That’s the problem we face today in our communities of color. The will and the academic talents are there; the only thing missing is a way for basketball players to continue playing the sport. Only a select, elite few receive invitations to Elite AAU teams or get scholarship offers from power conferences like the Big 10 and the ACC.

But tech entrepreneur Jamar Johnson, the founder and CEO of the CBLHoopCity app, saw an opportunity to build something truly unique in the basketball world: an amateur recreational league that users can access through an app and compete for cash prizes, totaling $1.6 million.

The big picture: building a community for adult non-professional basketball players and enthusiasts

Mr. Johnson started the CBL back in 2008 as a modest offline summer basketball league with a basic website. Today, the CBL has evolved into what Mr. Johnson considers the 3.0 version, and now the league is ready to onboard players and teams across the country. It’s one thing to have an idea; it’s another thing to execute on that idea and see it through to the end. That’s exactly what Mr. Johnson has accomplished, yet he isn’t stopping there.

At its core, the CBLHoopCity will be a competitive and fun basketball league experience for non-professional players who still love the game despite not making it to college or the pros. No other recreational-based basketball league is doing anything close to this concept, and it’s for a good reason: there are no huge profits in the adult recreational basketball world, only the love for the game by its participants.

Overall, the idea is to create a platform to empower and build a community for this marketplace of players, and honestly, nothing like it exists at the national level. All you really have across the country are fitness centers and city parks and rec leagues that don’t really offer any compensation other than self-confidence, respect and maybe a T-shirt or a miniature size trophy, that is normally given to kids for sports awards.

But the CBLHoopCity challenge is different, and here’s why.

How is CBLHoopCity app different from other recreational leagues?

Without a doubt, basketball is a unique sport in the U.S. Other countries have pro leagues, but it’s different here. It’s not only a sport because sports can teach life lessons, and that’s equally as important as staying fit and active.

Eventually, all athletes learn a hard lesson: you either sharpen your skills to make it to the next level, or you hit the ceiling and can’t progress any further in your career. Just imagine putting 20 to 22 years into a sport you love and cherish, and then you must realize and accept that your talent level doesn’t suffice to play at the next level. It happens all the time.

No matter how you try to sugarcoat it, it’s never easy when a young man or a young woman has been told that they will not be able to fulfill their dream of playing at their next level, despite putting two decades of work into the game. But the CBLHoopCity app is a way for basketball players to continue with their passion and careers after all other avenues close.

Not everyone can be LeBron James and jump straight to the number one pick in the NBA draft, nor can every young man or woman who plays basketball grow up to be like Michael Jordan. It takes a platform to get to that level because it doesn’t happen on its own, especially since talent isn’t necessarily the problem. Not every young basketball player receives the same level of coaching during pivotal periods of their development. Often, there’s an additional development period that gets overlooked.

Yet, the CBLHoopCity app wants to change that — and change it for the better in ways none of us can predict now. When you build a national league and community experience for passionate recreational players, anything can happen once it takes off. Look how quickly the AAU developed as a farm system for top NCAA basketball programs for the entire college basketball network.

Either way, the CBLHoopCity League at its core provides players with an alternative when the traditional roots to success are no longer available after high school and after college basketball as well. Best of all, Mr. Johnson founded this league and oversaw the development of the application that will run it all, so you can rest assured that everything young basketball players need to play is there.

One of the most exciting things about Mr. Johnson’s CBLHoopCity league is that it promises a college and NBA-like experience for its recreational basketball players, but how so? What’s the difference?

The platform breaks down athletes into a tiered system with multiple levels to advance for starters. All players must start out in the rec leagues and then progress and get more exposure through the CBL Accelerator program. It’s another way for players to showcase their talents and skills to agents, scouts and general managers from college and professional teams from all over the world.

Many young players may not know that some of the best NBA players got their professional start overseas, sharpened their skills and were given an opportunity at the highest level.

The CBLHoopCity app will showcase and give players the exposure and professional basketball organization creditability they need, which is something that no other recreational league in the country can do. Mr. Johnson genuinely believes that the player — the individual driven by a passion for the game — now has the tools to help them determines their success.

While the purpose of the league isn’t necessarily to flood the NBA with fresh talent, the CBLHoopCity league gives their players a shot at taking their skills to the next level after they learn to compete and win championships at the amateur level. Professional basketball leagues analyze and qualify players on many dimensions. Still, the will to win and championship experience against the nation’s best talent is arguably the most important, much more so than the ability to jump a 42-inch vertical or shoot a 33-foot 3-point shot.

But the league isn’t just for players either because, as anyone who’s ever run a recreational league knows, teams need sponsorship. After all, they do not have a revenue stream like an NCAA or professional leagues, including those overseas.

Top three benefits of sponsoring or owning a team

When you choose to sponsor or own a team in the CBLHoopCity, team plans are 100 percent tax-deductible, which makes it ideal for those who want to keep their finances in check while also helping under-served communities with the game of basketball.

Another benefit is increasing exposure for a company’s brand to demonstrate that this business is both active and passionate about supporting its community. Sponsorship has always been a part of the sports world because it allows businesses to amplify their brand and gain national exposure. The community goodwill and return on a tax-deductible sponsorship alone is worth considering.

The last benefit is that when you partner with the CBLHoopCity, you’ll most likely gain more website traffic, which only translates to more exposure in more opportunities to show the community that your business isn’t only here for profits.

Nowadays, people don’t want faceless brands with no personality; instead, companies that take a stand are gaining an edge over competitors who still have an old-school mindset of following the trends and political correctness.

No matter how you look at the situation, the future of CBLHoopCity is in good hands moving forward due to the high player demand and engagement. Look for the league to become a nationwide phenomenon in 2022 as the CBL promotes its cash prizes, totaling $1.6 million.