Black Texas Family Says They're Victims of a Hate Crime 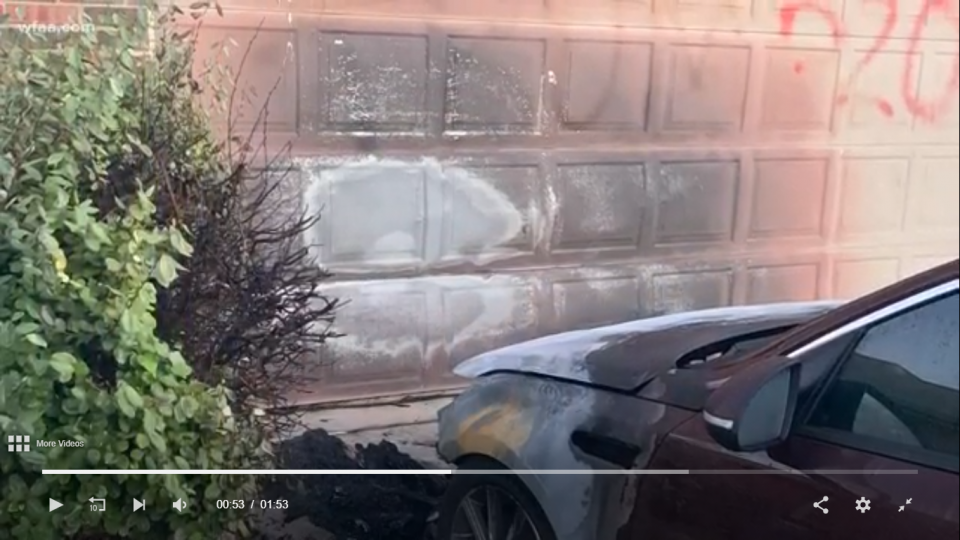 A car belonging to the Gipson family was burned and its garage door vandalized due to a BLM sign. (Image: WFAA)

A Black family in Texas says it was the victim of a hate crime that left two cars burned beyond repair and “Trump 20” spray-painted on its garage door.

Jayla Gipson, 36, told NBC News Wednesday that her son went to use the bathroom shortly after midnight and smelled smoke. When he went outside to see what was happening, he discovered the cars in their driveway aflame.

“It’s definitely a hate crime,” Gipson said to NBC. “‘Trump 2020’ was sprayed on our garage, our ‘Black Lives Matter’ sign was spray painted, and our cars were engulfed in flames.”

Police in Little Elm, Texas, said no one was injured and that an investigation is underway. There are no suspects to the crime and no one has been arrested. The two cars were burned beyond repair and the garage door was also damaged by the burning cars.

Gipson said the family has been well-received since moving to the area in 2017. She attributes the incident to the Black Lives Matter sign the family put on the front lawn in November. A GoFundMe was set up by Gipson’s neighbors and has raised almost $17,000 in nine days. Gipson said she was surprised and elated by the outpouring of support from the community and friends. She added that no one deserves this kind of treatment regardless of their political affiliation.

Incidents of voter intimidation and vandalism have happened across the country this year. In September, a Biden-Harris bus was surrounded by a group of Trump supporters in pickup trucks on a highway. President Trump retweeted a video of the incident saying, “I LOVE TEXAS!”

In the same month, a group of Trump supporters showed up at an early polling station in Fairfax County, VA, chanting “Four more years” and intimidating voters. In October, a poll worker in Tennessee was fired after turning away voters wearing Black Lives Matter clothing.