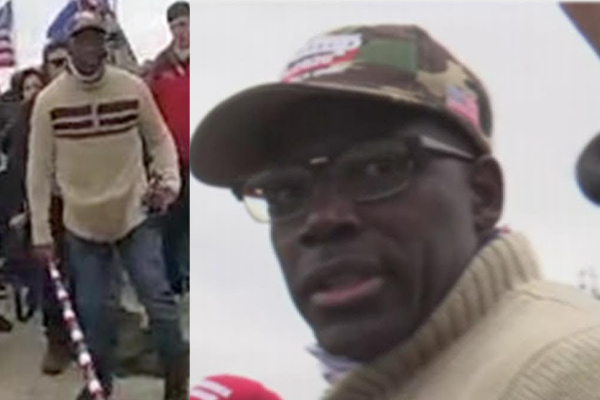 Mark Ponder, a Black Donald Trump supporter who participated in the Jan. 6 riots, has received the longest sentence of any insurrectionist.

On Tuesday, Ponder, 56, was sentenced to 63 months in prison after he pleaded guilty to assaulting three police officers during the Jan. 6, 2021, assault on the U.S. Capitol, CBS News reports. Ponder was amid the angry mob of Trump supporters who descended upon the Capitol demanding Trump be named the winner of the 2020 presidential election.

The Justice Department says Ponder swung a long, thin pole at a U.S. Capitol Police officer in the building’s West Plaza. The officer raised his riot shield above his head to protect himself from the attack, but Ponder struck the shield with his pole, snapping it in two, the plea agreement states.

Ponder then retreated to the crowd outside the Capitol and found a “new, thicker pole colored with red, white and blue stripes” that he used on a second Capitol Police officer who also used his riot shield to block the pole.

Shortly after the second attack, Ponder “wildly” swung the same colored pole while facing Metropolitan Police Department officers lined on the Capitol’s Upper West Terrace and hit one in the shoulder.

In April 2021, Ponder pleaded guilty to assaulting, resisting, or impeding officers using a dangerous weapon one month after his arrest. NBC News reports that Ponder is one of four Washington residents arrested for their actions on Jan. 6.

His sentence for Jan. 6 riots is tied as the longest with that of Robert Scott Palmer, who attacked law enforcement officers with a fire extinguisher. USA Today reports that Ponder attempted to plead his case before receiving the sentence.

Ponder claimed he “got caught up” in the chaos that day and “didn’t mean for any of this to happen.”

Ponder has been jailed since his arrest in March 2021.