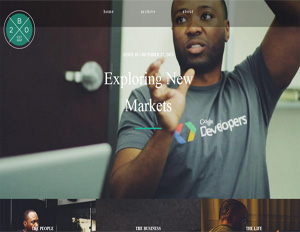 Formerly known as Black Web 2.0, B20 commits to featuring innovators transforming the tech space (Image: B20)

Formerly known as Black Web 2.0, B20 commits to featuring innovators transforming the tech space (Image: B20)

Angela Benton, CEO of Black Web Media and founder of NewME Accelerator, started Black Web 2.0 at a time when tech news sites and niche and mainstream media failed to highlight innovators of color. Six years since the groundbreaking site hit the web, Benton announced its relaunch as B20, an online zine under NewME, on Tuesday.

@BlackWeb20 is back! Check out these few words from founder @abenton. http://t.co/l47IbHBfvq

Back by popular demand, B20 will share the stories of entrepreneurs, startups and businesses, as well as give greater insight into the lives of innovators and content creators revolutionizing today’s tech ecosystem. Alongside co-founder Markus Robinson, Benton and the B20 team will deliver what readers have missed since Black Web 2.0 went on hiatus.

“I hadn’t thought of relaunching Black Web 2.0 until I started to get email, after email, after email. Â It’s easy to shrug off one person interested in bringing the site back, but I received tons of emails, tweets, and Facebook messages,â€ wrote Benton in her ‘Welcome Back’ address. “That first person I heard from was not alone. Â So, I took note and really tried to think of what exactly the evolution of Black Web 2.0 would be. Â It would have been easy to relaunch and do more of the same, but the landscape had changed. Â We aren’t in a time where ZERO media outlets (mainstream and multicultural) want to cover what we were doing in technology anymore. Â It’s funny to think back about Black Web 2.0 really innovating and disrupting what was being featured.â€

Benton ended her written address with “I hope you will be inspired to dream bigger, bolder, and with purpose.â€ I don’t know about you, but I’m already feeling motivated by the in-depth features on the site and excited to see what B20 has in store.

Have you checked out B20? Let us know what you think in the comments section.