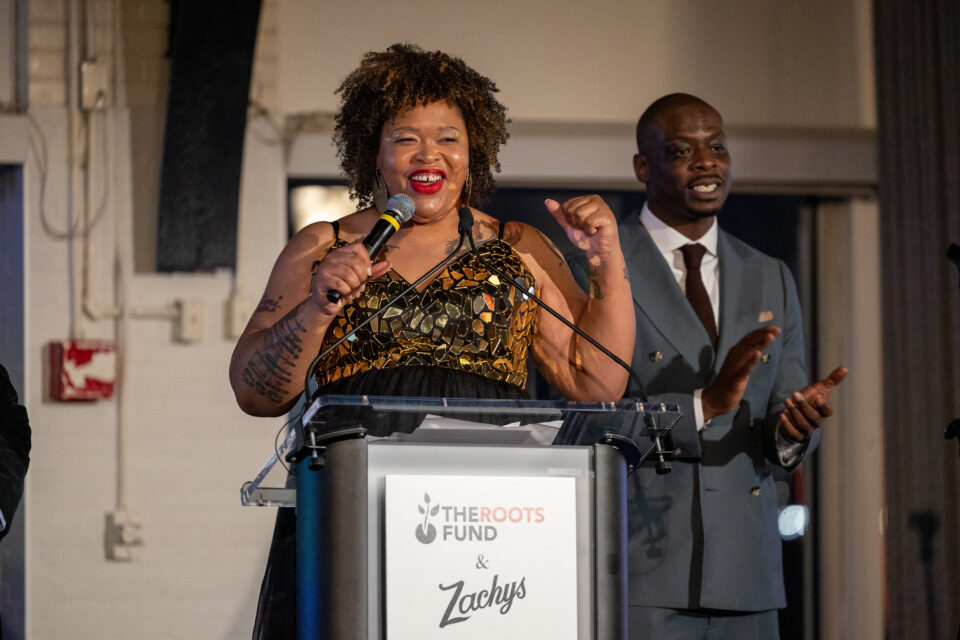 The Roots Fund’s first charity auction gala in New York took place last week (April 27), in their efforts to further inclusion in the wine and beverage industry by providing Black and Brown scholars access to resources. An evening of fine dining cuisine complemented by rare wines raised over $200,000 at The Chelsea Piers Lighthouse last Thursday, sponsored by Zachy’s, a wine auction house, and The Wine Spectator Magazine.

An additional $200,000 was raised in the online auction, which is set to finance The Roots Fund’s mission of opening doors for scholars of color to succeed in wine and beverage through scholarships, internships, mentorships, and career placement.

The Connecticut-based organization prides itself in its continued mentorship programs that allow scholars the knowledge necessary to make their mark in the industry and challenge the lack of diversity in the wine world by taking up space in it.

“It was absolutely breathtaking,” said Dubose-Woodson about the gala to Black Enterprise. “First time we’ve ever seen a full [sommelier] team of color, so that was amazing in itself.”

The sommelier who led the team at the gala was actually one of the fund’s scholars. Dubose-Woodson praised the wine steward’s sharp and elegant service, proud of the immaculate hospitality provided, as many guests relayed, which speaks volumes about the training the program produces.

“Being part of the Roots Fund to me is about creating space and pathways for people who look like me in the wine industry. So great to be this propeller of getting people in place where they need to be but more importantly providing them with support so they can excel in those places,” she said. “I think that’s what’s happening now with a lot of companies – they think ‘cause they’re offering jobs with new demographics, they’re like ‘people aren’t staying with us and we aren’t succeeding and we can’t promote them in this’ because there’s no support in these positions.”

June will mark two years that the scholarship opportunities will have been open, gardening 122 scholars in such a short amount of time. Dubose-Woodson credits social media for the interest, adding that the wine and beverage industry saw a boom in the midst of the COVID, as opposed to every other industry that suffered. Because furloughed professionals were looking for work, The Roots Fund recruited many scholars in the thick of the pandemic.

“In the wine industry, you can do 5 years of work in 18 months. This is why we need to tell more people about it,” she said. “It’s necessary. This work is necessary.”

The executive director warmly recalled that her scholars look at her as a part-time social worker and mom, being available to communicate through a direct-access pathway when needed.

According to Dubose-Woodson, what sets apart The Roots Fund is their ability to be flexible and re-evaluate their strategies by asking for community input every three to six months. Their team of all women of color all add something different to their resources, keeping their ear to the ground for the scholars’ needs.

The startup nonprofit offers a Rooted in France program, which sends primarily HBCU students to the elite Burgundy School of Business in Dijon for post baccalaureate studies in wine. Partnered with the school is Domaine Dujac, a Burgundy wine producer that has never made a commitment in this fashion to any program.

Additionally, there is a general scholarship for anyone interested, a college scholarship for students of color pursuing their undergrad, a Rooted in Lodi experience, as well as a STEP program.

Dubose-Woodson feels fulfilled about how far her scholars have gone currently, but has high hopes for the fund’s potential of enhancing the wine industry with more Black and Brown faces.

“I think people come to us… oftentimes they’re not confident because no one will support them, it’s just our job to say ‘hey we’re gonna give you the tools and it’ll be up to you to do the work. We’ll support you through it,’” she said.

To read more about the fund’s mission or to apply, visit therootsfund.org.

The Roots Fund @zachysauctions auction was EVERYTHING! I met so many of my Roots Fund family! And I had the pleasure of having an amazing conversations the Founders of Sip Michael Lavelle wine. pic.twitter.com/abOe7lXf1O