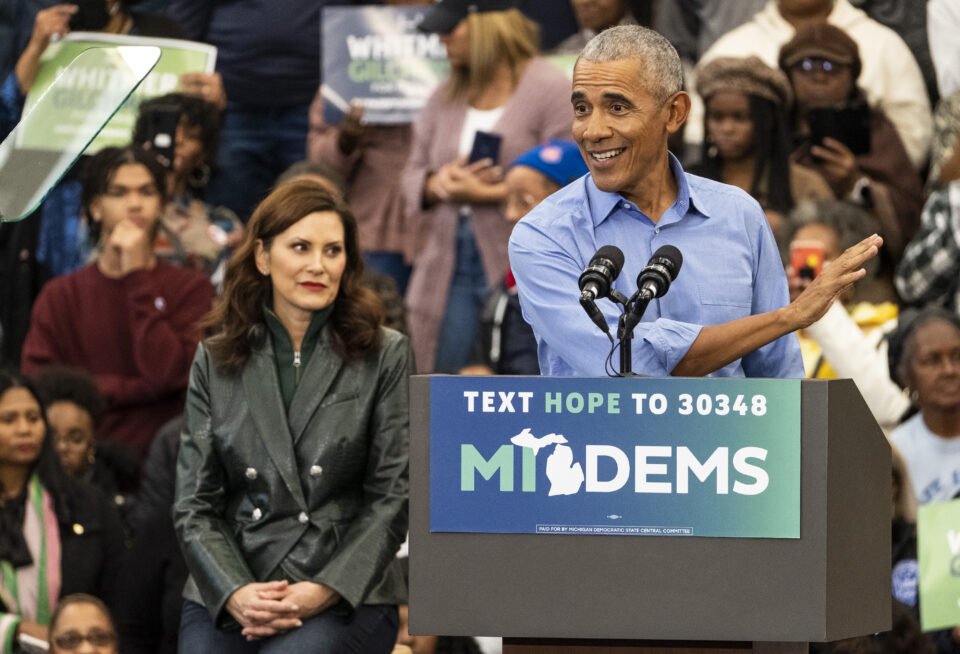 DETROIT, MI - OCTOBER 29: Former President Barack Obama speaks about to a crowd at Renaissance High School during a campaign rally for Michigan Democrats ahead of the midterm elections on October 29, 2022 in Detroit, Michigan. Former President Obama has been campaigning for Democratic candidates in key states ahead of the midterm election. (Photo by Matthew Hatcher/Getty Images)

Hands down, former president Barack Obama served his two terms in the White House with swag, and a Democratic rally in Detroit, Mich. this weekend proved he’s still got it.

Obama was interrupted at a voting rally in Detroit on Saturday, Oct. 29 when a Black woman yelled that he was fine. The 44th president of the United States began, “I have to admit that sometimes going out on the campaign trail feels a little harder than it used to.”

He scratched his head and continued, “Not just because I’m older and grayer.” As people laughed, a Black woman in the crowd shouted:

The rally crowd laughed again, this time with Obama. He asked, “I don’t know if you all heard that. I’m sorry what did you say?”

“She said I was still fine.”

The former president turned around and said, “I’m not gone tell Michelle you said that. Although Michelle does agree. She knows.”

The rally in support of Democrats was at Renaissance High School in northwest Detroit, according to Detroit Free Press. Obama encouraged the gymnasium of nearly 3,000 people to vote. He said, “This election requires every single one of us to do our part.”

Obama spoke on democratic polices for inflation and abortion, enforcing that “Democrats have actual plans.” One plan he pointed out included Gov. Gretchen Whitmer of Michigan’s support of abortion.

The first Black president said, “We should all agree women everywhere should be able to control what happens with their own bodies.”

The policies of Whitmer’s opponent, Republican Tudor Dixon, who favors a ban on abortion regardless of the mother’s health, rape, and incest, roused the crowd. A sea of boos swept across the gymnasium when Obama shared Dixon’s policy proposals. The former president saw the crowd’s reaction as an opportunity to drive his point home, according to The Detroit News.

He said, “Do not boo. Vote. Booing doesn’t help. They can’t hear you boo, but they can hear you vote.”