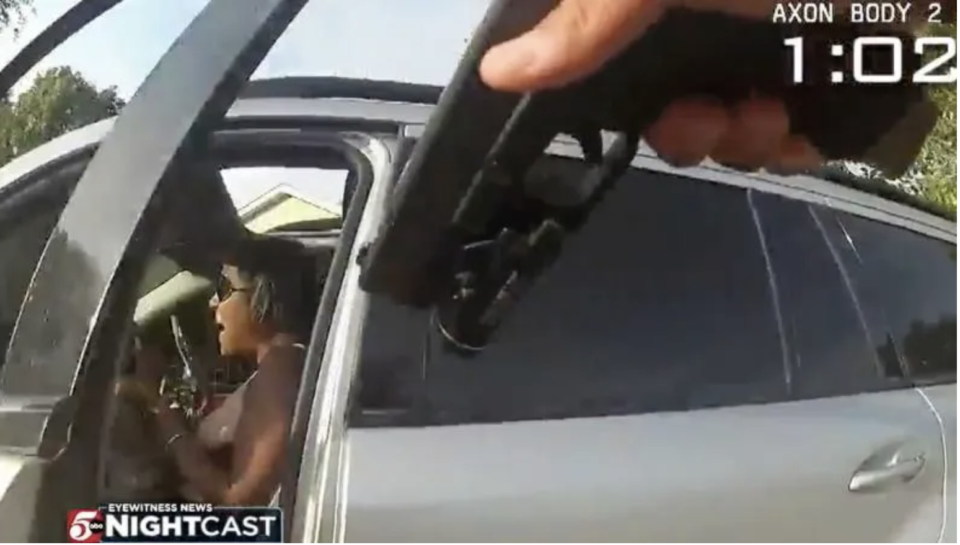 On July 12th, 2019, a Black woman was delivering food when she was pulled over for a traffic stop that quickly escalated when the cop pulled out his gun within sixty seconds and pointed it at the woman, reports KSTP-TV.

In October, based on Minneapolis Park Officer Calvin Pham‘s bodycam footage, the officer pointed his weapon at Jenice Hodge after pulling her over for a traffic stop. The Minneapolis Park and Recreation Board granted Hodge a $100,000 settlement, according to Raw Story.

Minneapolis Park Police Officer Calvin Pham’s body camera video shows him telling Jenice Hodge, 42, that he pulled her over because she was using her phone and improperly wearing her seatbelt.

Hodges explains to the officer, “I’m using my GPS to drop my food off.”

“And when I drove past you, you didn’t have your seatbelt on,” Pham pointed out to the driver.

“Because I wear it like this,” Hodges demonstrated by taking the strap off her shoulder.

Pham then requests her driver’s license and insurance card, and Hodge reaches in the back of her vehicle to retrieve her purse to hand him her identification. He immediately takes his gun out of his holster and tells Hodge to exit her car.

“I didn’t even have my driver’s license out of the sleeve, and I had a gun pointed at my head,” she said. “You didn’t see a firearm; you didn’t ask if I had a firearm; you just reacted to something that you seen in my wallet.”

Hodge has a valid gun permit, but the firearm was not in the car.

Hodge said she feared her life would end like Philando Castile, a 32-year old African-American man fatally shot in a routine traffic stop. He told an officer he had a permit to carry a firearm and was killed by Minneapolis-St. Anthony police officer Jeronimo Yanez in 2016. Yanez was later acquitted, reports Raw Story.

Retired Chicago Police commander Marc Buslik reviewed the tape and said the officer should not have pointed his gun at Hodge based on his observation.

Buslik said the officer should have asked Hodge if her firearm was physically in the car with her.

“The more appropriate response would have been, ‘Ma’am, do you have a firearm with you?'” he said.

However, Pham never inquired about the gun as the body camera video shows and never questioned Hodge’s permit.

Hodge was awarded a $100,000 lawsuit settlement based on the officer’s body camera video.

Pham documented the incident in his police report and cited he believed ‘Jenice may have a gun’ when he noticed she had a permit card in her wallet; however, Pham never said he saw an actual weapon in his report KSTP-TV reports.

Hodge is concerned for others who may find themselves in her situation.

“You never know when it’s your turn,” she said.