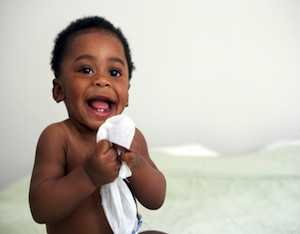 There has been a recent surge of black women breastfeeding groups throughout the country. The groups aim to close the nursing gaps between black mothers and mothers of other races, asÂ the CentersÂ for Disease Control and Prevention showÂ 61.6% of black mothers initiated breastfeeding, compared to 81.1% of white mothers, 83.8% of Hispanic mothers and nearly 91% of Asian mothers. Of black mothers who initiate breastfeeding in the beginning stages of infancy, only aboutÂ 16% continue for a full year.

Some of the most common reasons the number of breastfeeding mothers are considerably low in the black community are the misconception that nursing is “nasty,” full-time employment with less pay than white mothers, and doctors’ lack of encouragement for black mothers to breastfeed.

The disparityÂ is often directlyÂ linked to the disproportionate percentage of infant mortality and health issues affecting black children. “Infant mortality rates are more than twice as high in black infants as white infants,” according to The Nation’s Health. “A 2005 National Vital Statistics report concluded that reducing the black infant mortality rate to that of whites would save 6,000 children’s lives each year.”

SupportÂ groups for African-American mothers who breastfeed not only up the number of women in our community who adopt the natural feeding method, in turn improving our health, butÂ they also profit our financial status.

One study, according to the Natural Resources Defense Council,Â concluded that a group of infants on formula accumulated $68,000 in healthcare costs during a six-month period, while a group of nursed babies had only $4,000 in similar expenses. More specifically, the United States Breastfeeding Committee reports that “costs for hospitalization from lower-respiratory infections among 1,000 never-breastfed babies range from $26,585 to $30,750 more than for 1,000 infants exclusively breastfed.”

The obvious financial win in breastfeeding is the money saved on baby formula. What may not be so obvious, however, is the amountÂ of moneyÂ mothers who breastfeed pocket.Â It’s estimated that the total costs of formulaÂ equals anÂ average of $800 per year.

Organizations, like Black Mothers Breastfeeding Association and African-American Breastfeeding Network, serve as resources to teach mothers how to nurse their babies and the importance of doing so. Such groups also dismiss any negative stigma associated with breastfeeding and empower women to feel confident in nursing. They follow a set schedule to meet and gather at community facilities, like the YMCA. Groups are sprouting in Atlanta, Detroit and other cities across the United States.