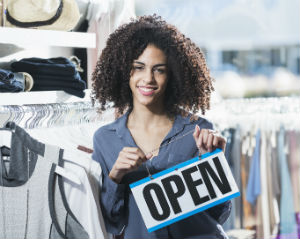 Algernon Austin, a senior research fellow at the Center for Global Policy Solutions, did an analysis of minority entrepreneurship, finding that “we need to add 1.1 million more businesses owned by people of color to the economy in order to make the racial composition of American business owners match that of the overall American labor force.” According to Austin, these new businesses would add about nine million jobs–enough jobs to achieve full employment for all racial groups. “These jobs would close the black-white unemployment-rate gap and the gaps for Hispanics and American Indians as well.â€

The challenge, Austin states, is overcoming the many barriers faced by minority entrepreneurs in growing their businesses, including financing. The purchasing power of African American consumers has reached $1.2 trillion, reports from the University of Georgia’s Selig Center for Economic Growth. Yet, the purportedÂ lifespan of a dollar is six hours in the black community compared to 17 days in white communities.

“If we spent nine cents of our collective dollar with black-owned businesses we could employ every single man, woman, and child within the black community,â€ claims PurchaseBlack.com founder Brian Williams. “So, it only takes one dime to solve the unemployment problem. No marching. Not protesting.Â  No Al Sharpton. Intentionally spending our money with each other will impact our standard our living.â€

A finalist at 2014’s Elevator Pitch Competition at Black Enterprise’s Entrepreneurs Summit, Williams launched Purchase Black L.L.C. in 2013. He began working on the site while obtaining an MBA at the University of Texas. He describes PurchaseBlack.com as a shopping website & mobile app (with more than 10,000 downloads). Williams sells curated products from carefully chosen black-owned businesses nationwide that sell by invitation only. “It’s hard to not only #BuyBlack, but it’s hard to also buy quality and reliable (products and services). We solve all three problems.â€

Supporting black-owned businesses is a sustainable way to strengthen the community,Â  says Williams. Strong black businesses can help solve many black issues, including standard of living and unemployment, “so I made a company that helps us spend with each other,â€ he explains.

Williams notes that black people spend enough money on goods and services to get black businesses to reach the level of a BE 100s Industrial/Services company– sales revenue generation beyond $10 million. “Yet, we will spend all of our money with major companies that don’t care about our communitiesâ€ he says, referring to not only employing black workers but doing business with black suppliers.Â  “We need a collective consciousness among us where our purchases are really an investment into the community’s well-being.â€

Tasha Smith Opens Up About Creating Her Own “Empire”