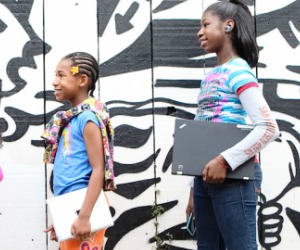 The Bank of the West awarded $210,000 in cash grants during its third annual philanthropy award program that took place in San Francisco on November 13.

BlackGirlsCode, a nonprofit devoted to promoting young women of color in the technology industry was recognized as one of three winning laureates and received a $50,000 grant.

BlackGirlsCode reaches out to the community and introduces young black females to the world of computer programming via languages such as Scratch or Ruby on Rails. By introducing computer coding lessons to young girls from underrepresented communities, BlackGirlCode is attempting to show that girls of every color can become the programmers of tomorrow. Following their motto of “Imagine. Build. Create,â€ the non-profit attempts to bridge the digital divide where young black women grow up in homes where their White counterparts are twice as likely to have home internet access then they are.

“My dream of starting BlackGirlsCode — an organization focused on introducing girls of color from underrepresented communities to technology and entrepreneurship — was born out of this frustration that “blacks in techâ€ are often the unmitigated invisible men (and women) in the room,â€ said Kimberly Bryant, the founder, via a statement on the group’s website. “I am in search of the next (black) Mark Zuckerberg. Above all I am hopeful that she will forge a new pathway towards innovation and social impact that will change the equation for future generations of black and brown creators and leaders in technology. It is a mission that is long overdue.â€

“Bank of the West is pleased to recognize this year’s award winning nonprofits and the significant contributions they have made in responding to the needs of individuals and families in the communities where they serve,” said Senior Executive Vice PresidentÂ John Bahnken, head of Bank of the West’s Wealth Management Group. “The leadership and dedication of these nonprofits are an inspiration to all of us who — either personally or professionally — support the important work of advancing opportunity and promoting health and well-being within our communities.”