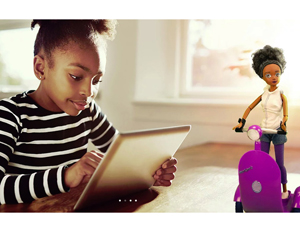 The robots come courtesy of SmartGurlz, a startup that makes coding robots and action dolls for girls ages 6 and older. SmartGurlz unveiled its latest line of STEM toys at this year’s CES technology trade show.

The company also makes a line of dolls with accessories as well as a backstory associated with STEM. One doll, Zara, is a tech wizard and hacker. Another is a mathematician and artist.

SmartGurlz CEO and co-founder, Sharmi Albrechtsen, launched the company after becoming frustrated by the lack of educational toys for her daughter. According to the SmartGurlz team, “toys currently created for girls often lag behind in the development of spatial skills, hands-on problem-solving skills, and confidence with technology.â€

The SmartGurlz kids’ robots foster spatial reasoning. Kids direct the machines in new environments and use maps. The STEM toys are bundled with the coding app, “SugarCoded.”

During the Google event, girls will learn coding basics by using Google Blockly, an interactive coding program. The kids’ robots and dolls will also be used. The event is designed to encourage the girls to seek out STEM careers. Participating requires no prior coding experience.

“We’re committed to helping more young girls develop an interest in STEM subjects and move from being solely consumers of technology, into creators and code writers. Our partnership with BlackGirlsCode for this ground-breaking workshop is a big step in the right direction,â€ says Albrechtsen in an emailed statement.

“Diversity in technology is essential and our multi-ethnic characters show that computer science is color blind,â€ she continued.

BlackGirlsCode recently teamed up with Accenture, a global technology services company, to offer an “Hour of Code” instruction to over a dozen black girls ages 10-15.