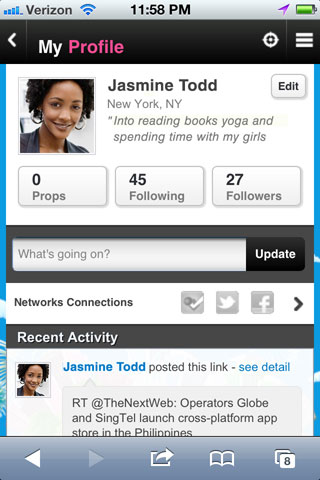 Move over Facebook, BlackPlanet is back. BlackPlanet Next, the new iteration of the 12-year-old mainstay, has been redesigned into a social curation engine targeting African-American consumers.

Before the phrase “social network” became a household name, Black Planet had millions of users.Â  The site became profitable in 2002, despite the dotcom bubble that brought other Internet companies crumbling to their knees. At its peak, BlackPlanet, a product of Community Connect Inc., which built websites to engage minority audiences, grew to 20 million users, and former co-founder, Omar Wasow, was named “Sexiest Internet Executive” by People magazine. For a time, the site’s success seemed boundless–that is until the advent of MySpace, Friendster, and Facebook.

“Where are African Americans today? Facebook…We over index on Twitter, we drive the trending topics on Twitter. We over index on mobile devices and that number is growing,” explained Navarrow Wright, chief technology officer for Interactive One, BlackPlanet’s parent company, which bought the property in 2008 for $38 million through parent company Radio One.Â  “BlackPlanet Next is a unique social experience that will allow us to bring our thoughts and ideas to the forefront.”

In addition, BlackPlanet Next will connect users with locally relevant information by allowing them to check-in at restaurants, clothing stores, or art venues using location-based features available through BlackPlanet Next on mobile phones. The site will then suggest other places visitors might like based on proximity, as well as reviews and suggestions made by the BlackPlanet Next community.

Finally, BlackPlanet Radio, which launched November 2011, will play an important role on the new site. BlackPlanet Radio is the digital industry’s first social radio website targeted towards African Americans, according to Interactive One. BlackPlanet Radio allows users to share personally curated playlists amongst their social network communities. Users can choose from a library of over 14.5 million songs.

Loyal users not interested in change, don’t worry. The current BlackPlanet platform is not going away, says Wright.

BlackPlanet Next opened up an invitation-only private beta audience last week and will allow current users the option to opt-in, in the coming weeks.

Bored and Disgruntled: How to Revamp and Recharge

7 Ways to Bounce Back After a Lay Off