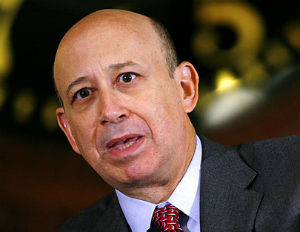 Goldman Sachs CEO Lloyd Blankfein said Monday that running a small business was as hard as running the investment banking firm — at 30,000 employees the largest in the world.

“As I’m listening to the entrepreneurs, I’m thinking, ‘Gosh, could I do that?” he said at a meeting for graduates of the firm’s 10,000 Small Businesses program at Long Beach City College. “I don’t do a bigger version of what they do. I do a different thing and they have challenges that I don’t have.”

Some might accuse Blankfein of being disingenuous, but he’s probably not; small businesses, he said, do not have the infrastructure, security and resources that Goldman does. As has been widely or not-so-widely reported (depending on who you ask), Blankfein is a product of the New York City’s housing projects. Blankfein is from East New York.

“At the end of the day, the name of the company I work for is Goldman and Sachs,” he said. “There’s no Lloyd Blankfein in that.”

View the video at Bloomberg.