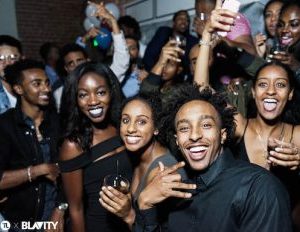 This is one time that you definitely should have had FOMO. From swag surfing during the lunch break to Rodney Williams, the founder and CEO of Lisnr, expressing why it’s good to be petty, as a black millennial, this conference was everything that you needed and more. If you missed it, here are 10 reasons why you should have been there.

Immediately before the conference got underway, weÂ were asked to cross the room and meet our neighbors. This was great because oftentimes in the black community, we are reluctant to talk to each other, as we hold on to one part insecurity and one part judgment, which feels like a wall on par with the Great Wall of China. But this action immediately opened the room up to conversation, transparency, and vulnerability. Â Â Â

Tara Reed shared four very important major keys on how to create an app without knowing one ounce of code. Utilizing different tools and resources, here are her four secrets to developer freedom:

What is All. Of. This?!? I wasn’t ready, but he most certainly was. Jason, Designer-In-Residence at Accel Partners, hit the stage, in typical West Coast fashion to Kendrick Lamar as the crowd chanted, “We Gone Be Alrightâ€, and he didn’t stop there. There are too many tweetables to name but my favorite was, “Get up out ya’ feelins,â€ as his grandma used to say. “If you feel discouraged, if you feel like you’re not able to do something, quit that, and understand that it’s worth it to try versus sitting back and wishing that you did.â€ There was so much knowledge left on the stage that midway through the conversation, he had to take a #DrakeBreak because that’s just what you do.

Team Blavity realized that the crowd might be suffering from the “itis” after lunch and decided it was time to take appropriate measures. Warren Jones of Toasted Life and JeShaune Jackson lead the audience in a gif-worthy, Swag Surf extravaganza, as everybody rocked back and forth to the beat of the Fast Life Yungstaz, “Swag Surfin’.”

If efforts to showcase the use case for her new product, Jessica Matthews, founder and CEO of Uncharted Play, pulled out a jump rope and in three-inch stilettos, proceeded to show the audience how Pulse, the energy harnessing jump rope, works. After, a few rotations and watching silver heels bling through the air, Jessica plugged the rope into Pulse Lamps that lit up like the Empire State Building on a New York City night. That, my friends, is what I call #BlackGirlMagic.

Coming up on the tail end of, “Life After A Milli,â€ Cheryl Contee realized that there were no women represented on the $1 Million+ fundraising panel. During the Q&A, instead of asking a question, she decided to invite herself up on stage to discuss her experiences… and what’s even more surprising is… the Blavity team let her. Instead of ushering her off, they gave her the floor to express her perspective, as she made room for herself on the armrest of Rodney Williams’ chair. She spoke about her recent acquisition from Facebook and why it was difficult, but doable, being a double minority, raising funds.

When Pinterest CEO Ben Silbermann sat down, the first thing that came out of his mouth was, “I think there should be more black entrepreneurs,â€ and I agree. Diversity has been a hot topic in Silicon Valley, but harping on it was not his focus. Instead, he provided actionable steps on how to become that entrepreneur that he, so excitedly, believesÂ in.

When all was said and done, in traditional Blavity style, the participants got in formation and spoke about why this conference was so needed, while giving their key takeaways. In addition, many of them discussed what they were currently working on. Just like Drake and Future, Blavity was definitely the plug.

One noteworthy testimony came from a 15-year-old audience member who came with his father and failed to mention that he was about to start cutting onions before he spoke. “There are a lot of us who are confused. We’ve been shown the wrong things in the media and we’re lost and I think you all are great examples of what we can be and I just want to thank you all for coming out,” annndddd my eyes just wouldn’t stop watering.

There was no lack of entertainment throughout the conference. With a taco-filled mixer the first night and happy hour the second, coupled by drinks coined, #blacktwitter, the crowd stayed lit the entire time. And did we mention the after party, thrown by Toasted Life, and all its excellence? Origin was at fire code capacity, as Just Blaze and special guests Coco and Breezy, kept the party going all night long.

Can’t wait until next year. We know it’s going to be bigger and better.