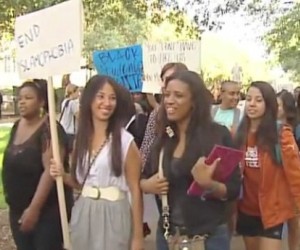 Dozens of students, alumni, faculty and other supporters met at the statue of Martin Luther King, Jr. in Austin, Texas Tuesday evening to denounce racism after reports of black, Hispanic and Asian students being targeted with bleach bombs.

“It’s very frustrating to know that it’s 2012 and that stuff like this still happens,â€ said University of Texas student Jaysen Runnels.

Authorities are the attacks which have occurred in the West Campus neighborhood, and police authorities tell KVUE they are investigating, but proving the attacks are hate crimes can be difficult.