BLOC Conference to Draw 500 Collegians from Across the Nation 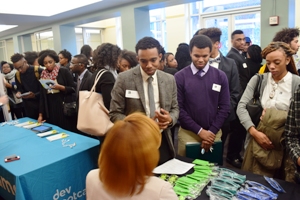 (Image: Courtesy of the BLOC Conference)

We are the ones we’ve been waiting for. That’s the first thing I thought when I learned about the BLOC Conference, an annual affair that tackles a disgraceful statistic head-on; black college graduates are twice as likely to be unemployed as white college graduates.

Certainly, employment is an essential item, but it’s not the only one on BLOC’s agenda. The organization putting on the conference, called Our Bloc, is a collection of leaders and visionaries committed to the pursuit of black collegiate excellence and black communal empowerment–as it says on its website. In addition to holding conferences, Our Bloc addresses the acute needs of the black community. It harnesses the energy of millennials as well as established professionals, creating an intergenerational force to be reckoned with.

Our Bloc is tackling the following:

Our Bloc is the brainchild of Amina Yamusah, its founder and CEO. A graduate of Princeton, Yamusah was unsure of her path post-graduation, not just to pay her own bills, but to enable her ability to give back to her community. As she spoke with others on her campus and at other schools, she learned that the majority of students were like her–unsure of what to do next.

“What we experienced was a national challenge,â€ she says.

With the grand goal of eliminating black collegian unemployment, Yamusah founded Breaking It Down, the precursor to Our Bloc. The next year, the organization held its first conference and changed its name to Our Bloc.

Led by a team of millennials (some are still undergrads) that is pan-African in its identity, the organization is already making an impact. This year’s conference, held Nov. 11—Nov. 13 in Philadelphia at the University of Pennsylvania, boasts an ambitious agenda, which includes networking opportunities, career and graduate school preparation, and powerful panel discussions featuring black professionals established in their careers.

“The career industry panels are so important,â€ says Paige Woods, head of programming and operations at Our Bloc, who is studying for a master’s in comparative social policy at the University of Oxford. “Black professionals come and speak about their careers in very tangible and supportive ways. From them, attendees learn that they can craft and shape the career they want.â€

Industries represented at this year’s conference include the arts, STEM, medical, bio-chem, entrepreneurship, and social justice. Sponsors include DevBootCamp and Genius in Collaboration PR.