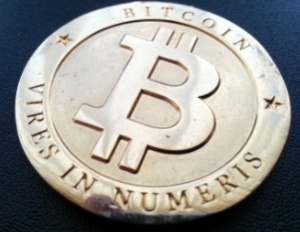 The announcement did not greatly affect the price of Bitcoin, as it has so far remained relatively neutral.

Bitcoin has been both praised and slandered by everyone with an opinion on the virtual currency and its financial future. But while some people see it as a fad, others are taking it seriously.

Bloomberg is taking it seriously enough to include the cryptocurrency in its Bloomberg Professional service.

Bloomberg recognizes the volatility of the Bitcoin marketplace, and varied opinions on the subject by many high-profile financial figures and instutitions like Warren Buffett, venture capitalist Marc Andreessen (who has invested $50 million in Bitcoin’s success), and the Internal Revenue Service. “Depending on your vantage point, bitcoin may be the biggest technology innovation since the Internet or a fad whose crash will be as precipitous as its meteoric rise,” said Bloomberg on its blog.

Bloomberg is using data from two Bitcoin exchanges–Coinbase and Kraken–to chart the market.

That isn’t to say Bloomberg is entirely behind the currency. “It’s worth noting that we are not endorsing or guaranteeing bitcoin, and investors cannot trade bitcoin or other digital currencies on Bloomberg,” said the blog post. “Global interest in digital currencies has undoubtedly increased, but these instruments still represent a fraction of fiat currency usage.”

Bitcoin is still an extremely volatile currency, and a string of thefts have made it seem less secure than previously thought. In February, Japanese bitcoin exchange Mt. Gox halted all trading and subsequently declared bankruptcy after having over 700,000 bitcoins stolen in a digital heist.