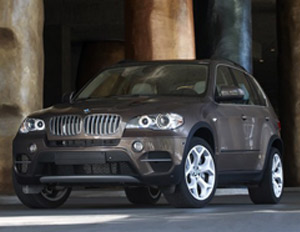 For the 2011 model year, X5 receives two new powertrains–the xDrive35i and the xDrive50i–and is outfitted with a brand-new fuel-efficient 8-speed transmission. The all-wheel drive configured vehicle also rides on a new double wishbone multi-link front suspension, which makes it easier to park due to its tighter cornering abilities. And the X5 receives an almost unnoticeable exterior update, too.

With the exception of the X5 being an SUV, this gutsy German-made vehicle has the same dynamic performance and handling attributes found in its car counterparts. The only difference is the X5 sits up high, offering great visibility and providing loads of cargo room, especially when the seats are folded flat. With the optional third-row seating, drivers can fit up to seven passengers inside.

Also, for the first time, the X5 can be equipped with a number of must-have factory-installed safety features. The first feature I recommend adding is an Active Cruise Control System, which assists the driver in maintaining a set distance from the car in front when the cruise is in use. Secondly, a Lane Departure Warning (LDW) system should be considered, too. The LDW provides audible alerts when the driver crosses a lane’s dividing line without the turn signal being activated. And lastly, BMW takes a page from Lexus, offering for the first time in the X5 a Side-View Camera, which provides an image of any traffic crossing in front or on either side of the SUV. Nothing goes unnoticed in this Bimmer.

While I enjoyed spending time behind the wheel of the X5, there were a few features that should have been a part of my test vehicle’s standard equipment package. For instance, my test vehicle lacked a back-up camera, a tinted rear privacy glass and a cargo cover. Also, unlike a number of keyless push-button starter ignition systems in a number of today’s vehicles, this one still requires a key-like device to start the vehicle.

The X5 is the perfect vehicle for those seeking the roominess of a wagon or minivan, but aren’t willing or ready to sacrifice the performance and handling found in a sports vehicle. The refreshed X5, which has been around since 1999, is the perfect SUV to fit the bill and kick it in. Unlike most of today’s SUVs, this one does it with style and class (and while proudly wearing a BMW badge).

The refreshed 2011 X5 can be tricked-out with a number of factory-installed accessories, depending on how one wants to personalize their SUV. Owners can opt to beef-up the X5 by adding a 20-inch wheel package or an upgraded high-quality16-speaker audio system.

After spending a week behind the wheel of BMW’s SUV, I realized that the automaker has done everything possible to continue to make this one fine automobile. And to make sure this Bimmer stays in reach of the average consumer, the base pricing starts out in the high $40K and can easily run-up to $80K when fully equipped. Oh, yes, BMW even offers a M-Series version of the X5, which will not only drive-up the price, kicks out more power, but also drive-up the vehicle’s swag-appeal, too. 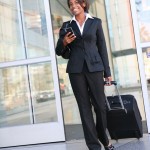 FacebookTwitterYoutube
← Black Blogger Month: The YBF, Downloading Dividends ← Don’t Be Afraid to Consider Relocating to Get Your Dream Job
×
'