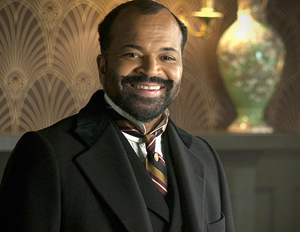 I’m a big fan of HBO’s Boardwalk Empire. I’ve watched the show from its inception, not only because I love all of HBO’s scripted series and the writing that goes into them, but I have a special affinity for the career reinvention that lead actor Steve Buscemi has created for by himself playing Nucky Thompson.

This season, new plot lines have been ushered in, putting African-American characters at the forefront, with some themes being quite historically controversial. When producers and writers brought in Valentin Narcisse, played by Jeffrey Wright, I felt mixed emotions—delighted that they’d infuse Caribbean culture by writing him in as a man of Trinidadian descent but suspicious as to why they chose to do so, especially for a character of moral degradation and corruption.

Narcisse, described as a “funhouse mirror distortion” of a Harlem racketeer named Casper Holstein, embodies many leadership characteristics and lessons—whether positive or negative is up for interpretation. Below are the top 3 that I believe professionals can learn from. (And here’s your spoiler alert, for those who have yet to see the latest season on their DVR):

1. Power brokers make the best boss moves in silence. Throughout the season, Dr. Narcisse—who has a major financial hold and influence on the black community of Harlem, New York— has seemingly strategized his way into a new territory (in Atlantic City, where Boardwalk Empire is based), by making silent, undercover plays. There have been several examples of this, from his secret, highly illegal deals at the Universal Negro Improvement Association to his back-office deals at the New Jersey nightclub of rival Chalky White (played by Michael Kenneth Williams).

Don’t take a cue from the slimy, illegal, shady aspect of it all. His actions lend a nod to the fact that many successful leaders aren’t always boastful or vocal about their next moves, making plans in silence, and putting the buzz phrase “show and prove” to work more often than not. They may be working on their next big project, one small, silent step at a time.

2. Influence is often dictated not by skill or ability, but by awesome gift of gab. Dr. Narcisse is known to use more than a $50 word or two, and he was even able to sway community gatekeepers in a recent episode to allow him to become their leader—- though he’s behind the problem they’re looking to cast out: heroin. His slick talk actually raises ‘Amens’ and head nods, and gives us all a preview of what’s to come: full infiltration of the black community in Atlantic City and its surrounding areas.

Again, you don’t want to be some slickster, tricking people into schemes or deviant plots for demise, but you do want to be able to communicate well, with a robust vocabulary and a captivating oratory style. It’s good to know who you are, your message and the platform you’d like to create for yourself—whether it’s through speaking engagements or the Web.

3. An openness and ease of mixing and mingling with people from all walks of life will give you a leg up. Dr. Narcisse has a knack for being able to hobnob with the affluent—and shady—underworld of politicians and gangsters, as well as church folk, Harlem hustlers, activists and entertainment professionals. He’s had his hand in almost every cookie jar, able to relate with people from diverse backgrounds and in diverse settings.

Most great leaders can do this. They can be cameleons or simply so socially savvy that their awesome personalities draw support—or at the very least, attention— from almost anyone.

I’m not saying you should be some snake-like villian like Dr. Narcisse— with a penchant for manipulation, murder and greed—but I am saying that if you can develop and strengthen skills to increase your power and influence for the greater good toward bigger boss moves in you life, you’re on to something.