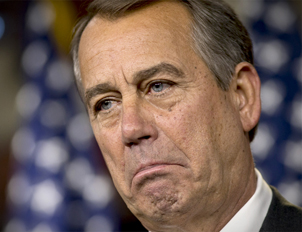 House Speaker John Boehner, who recently wept openly upon meeting Pope Francis, has announced that he will resign from Congress next month.

The Ohio Republican, who assumed his current role—arguably one of the most powerful positions in government—in 2011, has faced increasing opposition from Republican conservatives over some of his political strategies and legislation support. He recently came under Republican attack for his Iran strategy and for backing a bill (the Trade Promotion Authority legislation) that supported Planned Parenthood.

Though Boehner has been one of President Obama’s most visible political adversaries, his own party has accused him of backing down before Democratic demands. Jim Jordan, another Ohio Republican, who chairs anti-Boehner group House Freedom Caucus, recently led the hardest push against Boehner when he and the group organized to kill the Trade Promotion Authority bill.

Boehner’s replacement hasn’t yet been announced and there is wide speculation about who would be a suitable candidate. There’s also speculation that he’s stepping down to be free to run for the 2016 presidency.