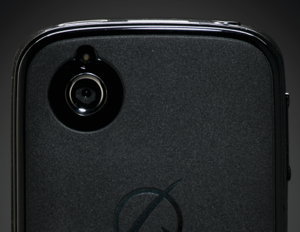 The Android smartphone isn't boasting any high-end specs, but does have a removable panel for modular add-ons.

At Mobile World Congress, Boeing unveiled the Boeing Black, its security-oriented Android smartphone. The aerospace company is popularly known for its commercial and military aircraft and combat systems.

The phone won’t compete with newer smartphones on the specs front. It has a 4.3-inch display with a middling 540 by 960 resolution, and a dual-core ARM Cortex A9 processor. The phone supports LTE, GSM, and CDMA connectivity, making it usable nearly everywhere.

“Through embedded hardware security features, software policy configurability and physical modularity, Boeing Black gives customers a trusted, more flexible and productive solution,” said Boeing. The physical modularity is thanks to an expansion port on the back of the phone that allows users to add more sensors or connectivity options for mission-specific situations.

As far as security goes, the smartphone encrypts all sensitive data and transmissions thanks to Boeing’s “PureSecure” architecture. The company claims it reduces the risk of data loss.

The cool factor from Boeing’s first smartphone isn’t in its speed or display, however. The phone has one more ace up its sleeve. It’s the self-destruct mode, an idea straight out of a spy movie.

In the FCC filings Boeing says the phone is covered in epoxy and tamper-proof screws, and “…Any attempt to break open the casing of the device would trigger functions that would delete the data and software contained within the device and make the device inoperable.â€ To use the phone, Boeing says you’ll have to sign a non-disclosure agreement, meaning you’ll have to keep anything you learn about the device to yourself.

No pricing or release date has been announced, although it’s safe to say you probably won’t see one in the hands of your average citizen. You can check out Boeing’s video of the Black below.