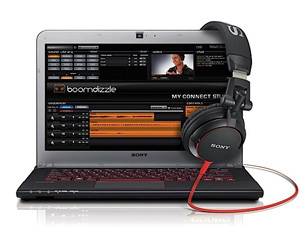 Besides his devotion to the art of hip-hop, and now acting, Renaissance man James Todd Smith, better known as LL Cool J, is also a bit of a technophile who has been surfing the new media wave since before it peaked.

In September 2008, LL launched Boomdizzle.com, a record label / social networking site. The Boomdizzle Network integrates patented collaborative technology with innovative digital marketing to change how music is recorded, distributed, and shared all over the world. The website accepts music uploads from aspiring artists, primarily from the hip-hop genre, and the site’s users rate songs through contests, voting, and other community events.

“Until now, musicians have never had the ability to collaborate and create music in real-time,” says LL Cool J. “Boomdizzle makes it easy for the next generation of great artists to come together, regardless of geography, and create the next big project.”

The software is used in Sony Vaio E 14P series laptops, and in 2012, the Sony/Boomdizzle Future Sounds bundle was sold in 30 Sony Direct stores as well as Walmart.com, Fry’s, and a number of additional retail outlets for $899.

Black Enterprise chose LL Cool J as this week’s Tech Startup of the Week because of his recent announcement that this May, after five years he will release his 14th album, Authentic, which contains a few tracks that were produced using MyConnect Studio.