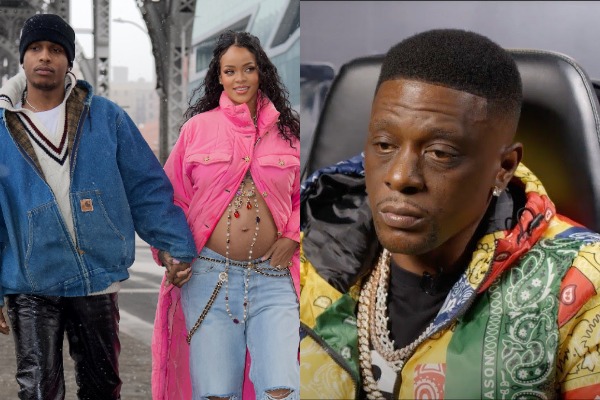 Rapper Boosie Badazz was not here for YouTube personality DJ Vlad criticizing Rihanna and A$AP Rocky for getting pregnant out of wedlock.

Boosie recently appeared on DJ Vlad’s VladTV, where he was asked his thoughts about Rihanna’s pregnancy. While praising Rihanna and Rocky’s new journey into parenthood, Vlad expressed his opposing views to the celebrity couple’s relationship status going into the pregnancy.

“I was a little bit disappointed that Rihanna did not get married before having that baby,” Vlad told Boosie. “When I look at her peers, [like] JAY-Z and Beyonce ….”

But Boosie, a proud father of seven, was quick to interject and shut down Vlad’s seemingly outdated views on pregnancy and marriage.

“Your peers. F**k all that. It’s what makes you happy,” Boosie shouted. “Nobody don’t give a f**k about peers. She’s a billionaire.”

Boosie hasn’t shied away from expressing his admiration for Rihanna in the past. The “Wipe Me Down” rapper even admitted to sending her multiple DMs attempting to get her attention. But he was able to put his crush aside and come to A$AP Rocky’s defense when it comes to impregnating Rihanna before proposing to her.

“Why she gotta follow somebody else drip for? She know what she f**king doing,” Boosie quipped. “Everybody ain’t gotta be motherf**kers that jump in marriages and still motherf**king sneak and geek.”

Vlad went on to note reports that Rocky and Rihanna are “talking about getting married after the baby.” But Boosie continued badgering the host for his initial criticism.

Vlad continued to drive his point about proposing to Rihanna if you had the chance.

“If you and Rihanna are dating and she told you she’s pregnant and she’s like, ‘Listen, but I wanna get married before announcing this to the world,’ are you gonna say ‘no?” he asked.

“No, it’s Rihanna. They have a mutual understanding,” Boosie replied. “Everybody ain’t for no fake -a** marriages.”

Boosie continued. “Everybody’s not for it. If they want to do it, they can do it. But they don’t have to do it when the world says,” he said.