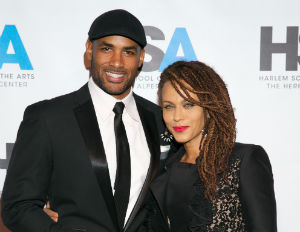 On Monday, Oct. 6, Harlem School of the Arts held their Fall 2014 Benefit Gala at Jazz at Lincoln Center to honor local philanthropists and community leaders who continuously show their dedication to arts education.

Honoring Hearst Foundation, GE Asset Management and Christopher M. Keogh of Goldman Sachs, the benefit gala allowed the Harlem School of the Arts to recognize and thank their many supporters who have helped them to remain a prominent community organization for nearly a half-century.

Featuring an array of student talent from musical, to dance and theater performances, honorary co-chairs Boris Kodjoe, Nicole Ari Parker, Terence Blanchard and many more came out to show their support for an industry that has clearly given them so much.

“I’ve always loved theater and loved music and my parents really wanted to give me a good education,” Parker tells Black Enterprise. “They sacrificed a lot to send me to really good schools, but it was clear that acting and theater was going to be a part of my path.”

Her husband, Kodjoe, spoke to the impact that arts education has on youth and why its important to support organizations such as Harlem School of the Arts.

“Kids are faced with influences from all directions, ranging from beauty standards, to how they’re supposed to speak and what they’re supposed to do in school. Art is a great way for them to understand that it’s ok to express themselves,” says Kodjoe.

Yvette L. Campbell, president and CEO of HSA says that her love for the arts started during her dance years at University of California, Berkeley, and was further honed when she moved to New York to dance for Alvin Ailey.

To learn more about HSA and how you can support arts education visit hsanyc.org.