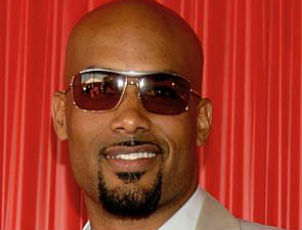 Boris Kodjoe is handling his business. Not only does strike a healthy balance between fatherhood (he dotes on his two children), husbandhood (he’s married to wife and former Soul Food costar Nicole Ari Parker) and the silver screen, but he’s also encouraging others to become entrepreneurs through ALFA, his custom designed collection of men and women’s clothing. Nowadays, he’s kicking some zombie butt in the sci-fi action thriller Resident Evil:Retribution as Luther West, a former hoops star-turned-vigilante in the war on the virus stricken “undead.” Blackenterprise.com caught up with the former Perry Ellis spokesmodel to discuss his aspirations of becoming a zombie, whether he’s cut out for comedy and why he’s sometimes the killjoy when it comes to his babies.

Blackenterprise.com: We’re thrilled that your character, Luther West, the lone brother in the Resident Evil installments, wasn’t killed. Question is: Are you human or something else?

Boris Kodjoe: (Laughs) You never know and that’s the fun thing about this movie you just don’t know. I could come back as a human, infected with the virus or die and be resurrected. Everyone will have to wait and see.

How has Mr. West evolved?

He takes charge of looking for Alice by getting the troops together to rescue her because he likes her, admires her and wants to help her out. Also, this installment has [physically[] challenged me because there’s a lot more fighting and we ha to train for six weeks prior filming. The choreography was done by Nick Powell(Braveheart, Gladiator, The Last Samurai) was extremely elaborate and while i’m in decent shape getting punched in the face and kicked definitely takes a certain [skill]. (Laughs).

Battling ride-or-die zombies is a far cry from your roles as a leading man in a romantic dramedy. Are you digging the change of pace?

That’s Hollywood for you: They don’t want to take any risks because everyone is trying to save their own job for a long time. I’ve really blessed that I’ve had the opportunity to get my hands dirty, scrap and fight in Resident Evil, do stage work, television, romantic comedies, and action. It’s great anytime an actor can diversify his resume and sometimes you have to do a smaller movie to get that opportunity.

You’ll be joining funnyman Kevin Hart on BET’s Real HouseHusbands. What can we expect?

Without saying too much it has been a real test of my laugh muscles. Trying to keep a straight face spending all day with Kevin Hart was difficult. It’s a great job, and I get to be funny. Most people don’t realize that I can be a real idiot, and I can totally explore that side of me.